With close to 50 breweries, all members of the L.A. County Brewers Guild, and at least 15 food vendors there was something for everyone. Although the photos may give the impression that the place was packed, there were virtually no lines for beer. Some of the food vendors may have had a little trouble keeping up with demand, but I heard no complaints because everything (that I tried anyway) was delicious. END_OF_DOCUMENT_TOKEN_TO_BE_REPLACED

The sold out kickoff festival was held at the Los Angeles Center Studios and in addition to the massive amount of beer there was live music, plenty of food trucks, and lots of water. Luckily, the heat wave that struck Los Angeles was kind enough to wait until the next day; that is not to say it wasn’t hot, but it probably wasn’t over 90. Luckily, the Los Angeles Center Studios is a pretty massive location so there was plenty of shade and somewhere to go sit if desired. END_OF_DOCUMENT_TOKEN_TO_BE_REPLACED 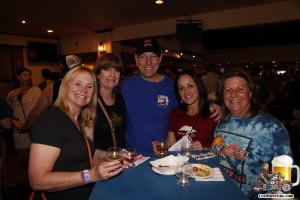 This event will be pretty similar to their inaugural event in that all the beer and food will come from the Los Angeles area and you will get unlimited pours of beer and unlimited samplings. Just so there are no surprises, many of the food vendors make jams or sauces, so you get a spoonful. You are probably not going to fill up on the food, but there were some tasty items there. END_OF_DOCUMENT_TOKEN_TO_BE_REPLACED

A few of the breweries in attendance included Absolution Brewing, Strand, El Segundo, Three Weavers, Phantom Carriage and Barley Forge. There was also a first time attendee for any festival I have attended, Reel Brewery. Reel Brewery is currently contract brewing but hope to open a tasting room in 2016 in Van Nuys, around the corner from MacLeod’s. I noticed that Santa Monica Brew Works was converting people with their PCH – Pale Chocolate Heaven. I tried Reel Brewery’s Hollywood Pilsner which was their take on Firestone’s Pivo Pils with their heavy dry-hopping; it was interesting enough that I look forward to visiting their tasting room when it does open. END_OF_DOCUMENT_TOKEN_TO_BE_REPLACED

Considering the heat index was well over 100 degrees out when BAM Fest started, they had a very nice turnout. I am not really sure how the crowd size compared to previous years because people seemed to be seeking shade more than normal which probably resulted in more art being seen this time; it did appear that there were more art exhibits opened to the public this year and I am sure everyone that took advantage of them appreciated it. The weather pretty much forced everyone to get to know their neighbor since the parking lot had about three umbrellas that most attendees tried to fit under at some point. END_OF_DOCUMENT_TOKEN_TO_BE_REPLACED 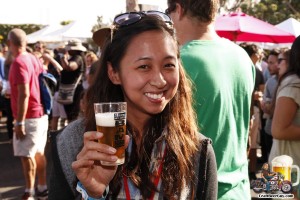 The current list of beer and cider vendors totals 38, with six food trucks available to pair with your favorite beer and live music provided by three groups. END_OF_DOCUMENT_TOKEN_TO_BE_REPLACED

The Pink Boots Society was created “to empower women beer professionals to advance their careers in the beer industry through education.” This is done via regional meetings, seminars and their scholarship fund. An example of the types of scholarships they fund would be the two-day Barth-Haas Hops Academy held in Yakima, WA this coming August. The scholarships are open to Pink Boots Society members and to become a member you must be a woman that has a paying job within the beer industry. END_OF_DOCUMENT_TOKEN_TO_BE_REPLACED

As it is Father’s Day and there are a lot of things going on, so I will go ahead and post the photos now and give an in-depth review later in the week. Suffice it to say, it was a great time with very little to find negative about the entire experience. The LA County Brewers Guild did a great job and is to be commended on putting on a great event. Of course, I am extremely appreciative of Absolution Brewing Company for sponsoring me at the LA Beer Week Kickoff. Cheers! END_OF_DOCUMENT_TOKEN_TO_BE_REPLACED

With foods coming from places such as Pitfire Pizza, Simmzy’s, Tin Roof Bistro, Little Sister, Sushi Akatora, Manhattan Beach Creamery, Cake Bakeshop, Rubio’s and Silvio’s there was literally everything from pizza to sushi, ceviche to beef skewers and bread pudding to ice cream sandwiches. There really was something for every palate; if you left hungry that was a personal decision. Music was provided by Vox DJs and The Lucky Ones. END_OF_DOCUMENT_TOKEN_TO_BE_REPLACED

2nd Annual Bite at the Beach May 16: Promo Code 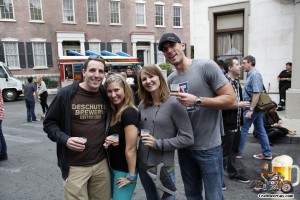 Come join your friends at Bite at the Beach, May 16

On Saturday May 16, the Manhattan Beach Chamber of Commerce will host their 2nd Annual Bite at the Beach at the MBS Media Campus in Manhattan Beach. Bite at the Beach is a fundraiser benefiting the StubHub Center Foundation and the LA Galaxy Foundation. This event is a little different than most beer festivals you may have attended in that it is a food and craft beer pairing event; with 24 craft breweries being paired with dishes from 24 local eateries. I did not attend last year’s event but heard nothing but good things about Bite at the Beach, so when I heard it was coming around again, just in time for American Craft Beer Week, I knew I wanted to become involved.

The breweries scheduled to appear include ABK Beer (they have been brewing for over 700 years), Absolution, The Brewery at Abigaile, Aftershock Brewing, El Segundo Brewing Company, Firestone Walker, Strand Brewing, San Pedro Brewing, Port Town, King Harbor and many more. The foods will come from such places as Simmzy’s, Tin Roof Bistro, Little Sister, Sushi Akatora, Manhattan Beach Creamery, Cake Bakeshop and Paul Martin’s American Grill. Music will be provided by Vox DJs and The Lucky Ones. As you can tell, there is definitely going to be a wide variety of foods to go along with the beer options; it sounds like a very fun event. You can see a list all of the breweries, restaurants and sponsors on the Manhattan Beach Chamber of Commerce website. END_OF_DOCUMENT_TOKEN_TO_BE_REPLACED