These photos were taken at the 6th Annual Local Craft Beer Fest which was held at the El Segundo Rock & Brews on Sunday afternoon. Admission to the family and pet friendly event included 10 beer tickets, with a choice of 12 local breweries; as well as a barbecued tri-tip lunch.

While previous editions of the Local Craft Beer Fest featured games, this year they decided to replace the games with live music provided by local alternative 80’s band, The One 80’s. To say they were well received would be an understatement. They had everyone up on their feet rocking out; I think live music is a nice touch to this annual event, I hope they keep it up. Cheers! END_OF_DOCUMENT_TOKEN_TO_BE_REPLACED

I could nitpick and complain about the plastic tasting “glassware”, or maybe suggest that the food options be spread out a little more equally; but other than that I am not sure what anyone could complain about. One thing is for sure, the beer options were outstanding. END_OF_DOCUMENT_TOKEN_TO_BE_REPLACED

The intimate event had a couple hundred attendees who enjoyed the day in the sun with more than 30 craft breweries, a few crafty breweries and several local restaurants that provided unlimited craft beer pours and tasty food stuffs. END_OF_DOCUMENT_TOKEN_TO_BE_REPLACED

A few of the breweries in attendance included Absolution Brewing, Strand, El Segundo, Three Weavers, Phantom Carriage and Barley Forge. There was also a first time attendee for any festival I have attended, Reel Brewery. Reel Brewery is currently contract brewing but hope to open a tasting room in 2016 in Van Nuys, around the corner from MacLeod’s. I noticed that Santa Monica Brew Works was converting people with their PCH – Pale Chocolate Heaven. I tried Reel Brewery’s Hollywood Pilsner which was their take on Firestone’s Pivo Pils with their heavy dry-hopping; it was interesting enough that I look forward to visiting their tasting room when it does open. END_OF_DOCUMENT_TOKEN_TO_BE_REPLACED

Yesterday was my third time attending Taste of Brews and this event just keeps getting better. There were supposed to be between 60 and 70 breweries; I did not count them but there was beer enough for everyone. The food trucks were spread around evenly throughout the park and there were two stages for the live music which featured The Tomcats and RedEye Redemption. And then there was the beer. END_OF_DOCUMENT_TOKEN_TO_BE_REPLACED

They did have some good food provided by Stonefire Grill, Rubio’s and Sol Agave; and some pretty tasty desserts from Nothing Bundt Cakes and Paradise Bakery to go with the various wines I saw being poured, so maybe that had something to do with it. So while I may have stayed for the cool museum pieces, I came for the beer. END_OF_DOCUMENT_TOKEN_TO_BE_REPLACED 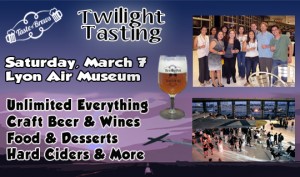