Join Angel City Brewery this year for their 7th annual Avocado Fest: California Grown! Help them celebrate the release of their Avocado Ale, a crisp and refreshing Kolsch style ale, perfect for quenching your summer thirst! Come enjoy Avocado food, great music, and fun games over the course of our two day festival, on August 3rd and August 4th, where they will celebrate all things grown here in California!

They will have a special can release of Avocado Ale right after it is canned at noon Friday, August 2nd. 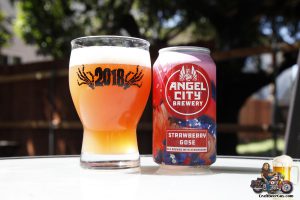 California’s sweetest season kicks off in April, and Angel City is letting those strawberries shine, with their limited-release Strawberry Gose. Starting this Wednesday, May 15, 6-packs of 12 oz. cans will be available from the brewery and on-tap around town at select bars and restaurants. This year’s cans feature art by local Leah Smithson, member of Art Share LA, located around the corner from the DTLA-based brewery.

Strawberry Gose is a tart, refreshing, slightly salty ale, with a fruity aroma. In fact, the beer won a Gold Medal at last year’s California State Fair for best gose-style ale. Therefore, the brewery decided to reintroduce the beer for 2019.

The gose-style was originally dreamt by a fan as part of a contest the brewery ran – ‘What Would You Brew?’ The winner participated in a brew day with Head Brewer Layton Cutler and the Angel City team. In the years following, it became more and more popular, where the beer became a consistent specialty can release. END_OF_DOCUMENT_TOKEN_TO_BE_REPLACED

Long time followers may recall that The Brewery at Abigaile had done the Brewtopia beer festivals back in 2015; Sunday’s event was a mini-version of the prior events, but the few dozen people that did attend had a beautiful Sunday afternoon to enjoy craft brews on the Alta House patio. END_OF_DOCUMENT_TOKEN_TO_BE_REPLACED

These photos were taken Friday at the inaugural Pasadena Tournament of Roses Sip & Savor, a three-day end-of-year event being held at the Rosemont Pavilion/Jackie Robinson Memorial Field at the Rose Bowl this weekend. The family friendly event celebrates Southern California’s food, wine and craft beer scene. Attendees can try various foods from about 10 restaurants like The Crack Shack, Pez Cantina, and Lucille’s, which you can pair with wine from about 15 wineries, or craft beer from the four breweries representing the Greater Los Angeles area.

The breweries pouring included Firestone Walker’s “sports bar”, complete with TVs so you can watch the game while enjoying one of their brews, Angel City, Alosta Brewing, and recently opened, Highpoint Brewing Company. END_OF_DOCUMENT_TOKEN_TO_BE_REPLACED

These photos were taken Sunday evening at the DTLA Breweries United 4.0 craft beer festival, which was held at the Triangle Lot outside Angel City Brewery. The event featured special brews from each of the seven participating breweries as well as a collaboration that involved all seven.

The fourth in a series of semiannual craft beer festivals put on by DTLA Breweries United, Sunday’s event featured beers from member breweries Angel City, Arts District Brewing, Dry River Brewing, Indie Brewing, Iron Triangle, Mumford and Boomtown Brewing. In addition to lots of good beer, food was made available by Peaches’ Food Truck. There was a DJ, a dunk tank featuring brewers from each of the participating breweries, cornhole, and lots of sunshine to keep the hundreds of attendees entertained. All the proceeds from the event went to benefit the Keep A Breast Foundation. END_OF_DOCUMENT_TOKEN_TO_BE_REPLACED

The brewers were broken into four groups; Water, Malt, Hops, and Yeast. Following strict sumo wrestling protocol, the matches were best two out of three, double elimination with the winners advancing to the Cellar and Brewhouse Divisions. END_OF_DOCUMENT_TOKEN_TO_BE_REPLACED

The proceeds from the event went to the Keep A Breast Foundation.

I had to take advantage of attending this event as I just never seem to get to DTLA when it comes to craft beer; in fact, I was going through my notes and realized that it has been almost two years since my last visit there. Back then only Angel City and Mumford had tasting rooms open to the public; as of today all seven members of the DTLA Breweries United have tasting rooms. END_OF_DOCUMENT_TOKEN_TO_BE_REPLACED

With close to 50 breweries, all members of the L.A. County Brewers Guild, and at least 15 food vendors there was something for everyone. Although the photos may give the impression that the place was packed, there were virtually no lines for beer. Some of the food vendors may have had a little trouble keeping up with demand, but I heard no complaints because everything (that I tried anyway) was delicious. END_OF_DOCUMENT_TOKEN_TO_BE_REPLACED

I could nitpick and complain about the plastic tasting “glassware”, or maybe suggest that the food options be spread out a little more equally; but other than that I am not sure what anyone could complain about. One thing is for sure, the beer options were outstanding. END_OF_DOCUMENT_TOKEN_TO_BE_REPLACED

The intimate event had a couple hundred attendees who enjoyed the day in the sun with more than 30 craft breweries, a few crafty breweries and several local restaurants that provided unlimited craft beer pours and tasty food stuffs. END_OF_DOCUMENT_TOKEN_TO_BE_REPLACED