These photos were taken Sunday afternoon, November 6, when I visited the Booze Brothers satellite tasting room in Fallbrook. Those of you paying close attention may recall that I occasionally visit breweries in the Inland Empire and that it usually coincides with my number one grandson performing in a play; Sunday was no exception.

So, first things first; when I was on Mission Road and my GPS unit suggested that Booze Brothers was coming up soon, on the right, I slowed to a speed that would allow me to make a quick turn into a parking lot should that be required. I drove to the first traffic signal and noticed by it being the 700 block of Mission, that I had apparently driven passed Booze Brothers. I made a u-turn and started paying attention to whatever street numbers I could find, but never saw a sign for Booze Brothers, so when I hit the 900 block I made another u-turn and parked at the first spot on the street I could find. END_OF_DOCUMENT_TOKEN_TO_BE_REPLACED

These photos were taken Saturday, November 5, at Upshift Brewing Company and Surfridge Brewing Company, both of which are located in El Segundo and coincidentally, were both celebrating their third anniversaries. Both events featured food trucks and live music.

I started my day off at Upshift Brewing, for no particular reason (at the time) other than it was the only anniversary party I knew was happening. They had a ticketed VIP hour, but I showed up after that. There were a couple dozen people there when I arrived, but it did not take long for the inside and outside seating to begin filling up. END_OF_DOCUMENT_TOKEN_TO_BE_REPLACED

These photos were taken Tuesday, October 11, day seven of my Craft Beer Tour 2022. As I mentioned in the last article, we headed back towards Ruth’s home in Grand Rapids so that I could hit up a few breweries in the area before I headed back to California. We visited Railtown Brewing Company in Dutton, Broad Leaf Brewery + Spirits in Kentwood, and City Built Brewing in Grand Rapids.

We started off the day by driving south a ways to Dutton, where we visited Railtown Brewing Company, a brewpub that opened in December 2014.

They have a 7bbl system, which offered 15 beers, a hard seltzer, and a cider on the day of our visit, with a nice variety of styles available. Being a creature of habit, I went with their Citra Warrior IIPA, Hophikers Guide to the Galaxy, and Harvest Smash ’22 their wet hopped harvest ale. All were solid, but I have to give the nod to the Citra Warrior as my favorite.

It is a nice space with friendly staff and customers; you will have a good time if you stop by.

Railtown Brewing Company is located at 3595 68th Street SE, Dutton/Caledonia. They open at 11:30 AM, Monday through Saturday. They have a nice food menu featuring munchies like cheese curds, salads, burgers, hoagies, and chicken sandwiches. They have cans available to-go.

After saying our goodbyes, we headed about 10 minutes north to Broad Leaf Brewery + Spirits in Kentwood, a brewpub that opened in 2019.

Broad Leaf is a nice, spacious location that is another brewery that includes a video arcade; I am guessing the arcade is a nice draw in the winter for those with kids.

On the day of our visit they had about 15 beers available on tap, as well as a wide variety of house cocktails, because, well they brew beer and distill their own vodka and gin. We were not going to be there long, so I had their Magnetic Nebula and Ruth had the Chromatic Shatter, both were solid pale ales.

The Broad Leaf Brewery + Spirits location we visited (they have two) is located at 2885 Lake Eastbrook Blvd. in Kentwood. They are open seven days a week, and offer cans to-go. Their food menu ranges from nachos and chicken tenders, to egg rolls, various chicken dishes and more.

As my brother-in-law was unable to join us on our adventure, I wanted to take him to dinner with us, so the three of us jumped in a car and headed over to City Built Brewing, a brewpub that opened in 2017.

The location is a renovated 19th-century building that had over $1 million put into it to install their 10bbl brew house and kitchen, along with seating for 180. The food menu is Puerto Rican cuisine and features things like tacos, shrimp, and braised beef, but with a Puerto Rican flair. I had the tacos.

They had about 20 beers on tap, as well as some hard seltzer, mead, and cider. I tried their Harvest Lager (wet hopped) and the Skull ‘n Bones IPA. I definitely enjoyed them.

City Built Brewing is located at 820 Monroe Avenue NW, in Grand Rapids. They are open daily until 10:00 PM and offer cans and food to go. We had a good time there, even if it felt a little classier than I expected.

And then it happened; the reason I am writing this three weeks after the fact. I woke up in the middle of the night feeling like crap. It is a good thing I was at my sister’s house, because she was in the medical field and later that afternoon I was in an urgent clinic.

If it was not for my photos and my Instagram posts I would not have been able to write about this trip because I was way out of it for what seemed like a week. Anyway, thanks Ruth for not letting me die.

So, while we were only able to go out for a week, we did manage to discover 13 new breweries, and an excellent craft beer bar. A downside of flying versus driving, besides the increase cost when you have to reschedule last minute, is that you cannot bring any beer home with you. Oh well, I have the photos. Cheers!

Back to Photos from Railtown Brewing, Broad Leaf Brewery, and City Built Brewing
[Show as slideshow] 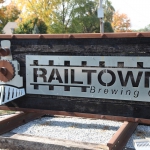 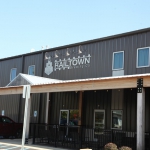 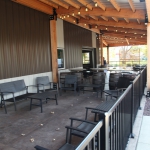 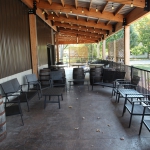 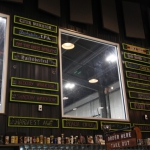 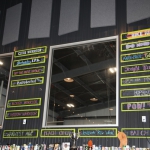 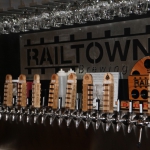 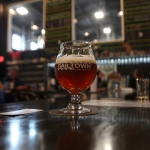 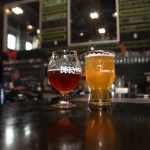 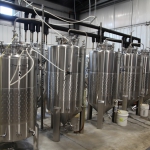 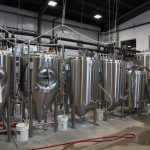 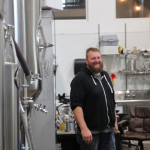 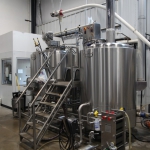 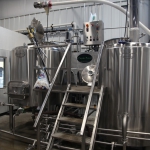 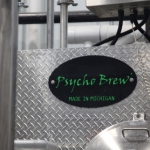 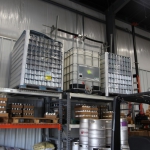 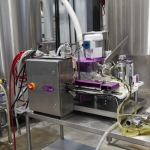 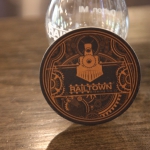 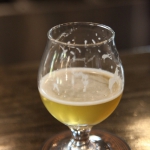 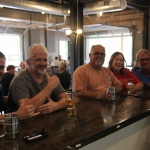 These photos were taken Monday, October 10, day six of my Craft Beer Tour 2022. As I mentioned in the last article, my sister Ruth wanted to visit the Pictured Rocks National Lakeshore so we set the GPS for Munising to check it out. We then visited ByGeorge Brewing (also in Munising) and Rusted Spoke Brewing in Mackinaw City.

While I figured that Pictured Rocks must be pretty photogenic, as we approached Munising I started having some concerns because virtually every billboard or sign that I saw mentioning Pictured Rocks seemed to include kayaks or boats; I was wondering how easy it was going to be to photograph this place from land. The GPS was not being very helpful either since dozens of places had “Pictured Rocks” in the name. Eventually we happened upon a helpful Park Service Ranger that told us we wanted to go to Miners Castle and gave us directions to get there. END_OF_DOCUMENT_TOKEN_TO_BE_REPLACED

These photos were taken Sunday, October 9, day five of my Craft Beer Tour 2022. Ruth wanted to visit the Pictured Rocks National Lakeshore, so we set the destination of Marquette and reserved a hotel room so we would be sure to have somewhere to stay. As a result, we ended up visiting Beards Brewery in Petoskey, Biere de Mac Brew Works in Mackinaw City, and Barrel + Beam in Marquette.

So, for those that do not know what a Yooper is, it is a self-given nickname given to the residents of Michigan’s Upper Peninsula. If you look at a map, which I never did until two weeks later, you will notice that these next three breweries were about as “upper” as you can get on the Michigan Upper Peninsula. END_OF_DOCUMENT_TOKEN_TO_BE_REPLACED

These photos were taken Friday and Saturday, October 7 and 8, days three and four of my Craft Beer Tour 2022. As I mentioned early on, my sister (Ruth) was in a major train accident back in June and was pretty jacked up, so Friday, before we did anything else, I had to take her to get more x-rays. After that we headed up to her cabin in Dublin. On Saturday we visited Right Brain Brewery in Traverse City and Hop Lot Brewing Company in Suttons Bay.

Ruth’s appointment was around noon, and she knew there was a craft beer bar fairly close to the medical center that I could hang out at while she did her thing. She sent me to HopCat, a craft beer bar with numerous locations, this one in Grand Rapids and only sold beer brewed in Michigan. Okay, that is not exactly true; they also sell a wide variety of food, and some hard seltzers. They had about 40 options available.

I have to admit, I was a little bummed that Ruth’s doctor visit only lasted an hour, because I could have had a great time there. I had just finished my Hoplicated Imperial Pale Ale from Odd Side Ales when I was trying to decide between the Bark Lord Imperial Stout from Transient Artisan Ales and a 2018 Founders CBS, when I got the message it was time to pick her up. Bark Lord was phenomenal, but my server offered me a small crowler of the Founders to-go, so that is what I took with me. END_OF_DOCUMENT_TOKEN_TO_BE_REPLACED

These photos were taken Thursday, October 6, day two of my Craft Beer Tour 2022. We started off the day looking for trees with leaves changing colors, then worked our way to Newaygo Brewing Company and hit up Coopersville Brewing Company on the way home.

So yeah, while the end goal was to visit new breweries, we did want to check out some of the fall beauty this part of the country offers this time of year, so my sister suggested we take back roads to the town of Newaygo. Unfortunately(?), the weather has been in the 70’s around here and that is not exactly conducive to causing leaves to change colors. Luckily, it got very cold Thursday night, so things should be popping soon. That being said, the first few photos are from Hardy Dam Pond and the Croton Dam. END_OF_DOCUMENT_TOKEN_TO_BE_REPLACED

These photos were taken Wednesday afternoon in Grand Rapids, Michigan as I started my annual craft beer tour. Wednesday found me at The Mitten Brewing Company, a microbrewery/pizzeria that opened in November 2012.

For over a year now, my sister Ruth and I have been planning a fall craft beer tour through the northeast as I have very little experience there and it would be cool to visit breweries and watch the leaves change colors. Unfortunately, my sister happened to be a participant in the Amtrak train derailment in Missouri this past June. To say she got jacked up in it would be an understatement (26 broken bones above the waist), but she wanted me to come visit, so we decided we would venture around the state for a week or so. END_OF_DOCUMENT_TOKEN_TO_BE_REPLACED

These photos were taken Saturday afternoon at Ranch Los Cerritos Historical Site, where Craft Beer Long Beach held their 6th Annual Craft Beer LB Fest. The sold out event featured brews from 14 breweries and the Long Beach Homebrewers, as well as food from local vendors, live music, and a Kid Zone for the families in attendance.

It was a remarkably lovely day in Long Beach, especially when compared to the past couple of weekends. While it was sunny, the overhead clouds, trees and tents kept it from getting too hot. END_OF_DOCUMENT_TOKEN_TO_BE_REPLACED