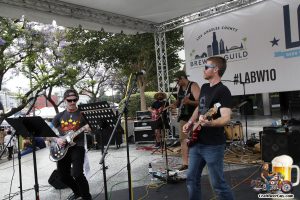 The Brewers Kickoff Festival is definitely the event you want to attend as it will feature 90 independent craft breweries showcasing more than 250 unique beers, local food vendors, and live music. VIP ticket holders get in at noon, with General Admission beginning an hour later. There is no guarantee tickets will be available at the door, so buy your tickets today on Eventbrite END_OF_DOCUMENT_TOKEN_TO_BE_REPLACED

The brewers were broken into four groups; Water, Malt, Hops, and Yeast. Following strict sumo wrestling protocol, the matches were best two out of three, double elimination with the winners advancing to the Cellar and Brewhouse Divisions. END_OF_DOCUMENT_TOKEN_TO_BE_REPLACED

In addition to the copious amount of beer that was available, the Kickoff Festival also featured live music, games, food, and water for staying hydrated. Unlike last year when the temperature was over 100 degrees, yesterday was overcast for a good portion of the day which kept the temperature down to the low to mid-70s; people seemed relieved, and I even saw a couple sweaters being carried around. END_OF_DOCUMENT_TOKEN_TO_BE_REPLACED

I did not ask how many tickets were sold, but I suspect there were about 1,000 people in attendance. With close to 100 booths to visit, lines were never really an issue; with the exception being when a brewery had a scheduled release of a special beer they brought. Even then, once the beer was opened, the lines seemed to disappear rather quickly. END_OF_DOCUMENT_TOKEN_TO_BE_REPLACED

After leaving the LA Beer Week Kickoff Festival we stopped by El Segundo Brewing Company (ESBC) for an after-party they were having. They were kind of on the way home anyway, so we headed over.

By the time we arrived the tasting room was jumping as a mixture of people that had obviously been to the LABW8 festival melded with the usual taproom crowd that flock to ESBC to enjoy their fresh brews. I had seen something mentioned on social media about the event, but I did not realize that this was more than just an after party; this was much more. END_OF_DOCUMENT_TOKEN_TO_BE_REPLACED

Back in September I informed you that Rob Rubens Distilling & Brewing would be opening in El Segundo; in fact, I predicted mid-2016 as when the doors would actually open. It turns out I was correct, as just in time for LA Beer Week, Rob Rubens will open their doors to the general public this Friday, June 17 with their soft open beginning at 4:30 PM and they will continue to be open seven days a week from that point on.

These photos include a few visits that I made over the past nine months while documenting their progress as well as their Friends & Family party that they had at the production brewery’s tasting room on Wednesday evening.

Since distilling spirits takes a little more time and money than brewing beer, Rob Rubens Distilling & Brewing is starting off with providing craft beer with the spirits becoming available in the coming months. Last night we were able to sample a few of Ruben’s flagship beers, such as their Gunpowder Cream Ale, Hitman Ale Altbier, a yet to be named pale ale and a stout. The brews were all solid and I learned something about cream ales; it is not about vanilla flavors at all. Cream ale is essentially ale brewed with ale or lager yeast at lower temperatures, and then cold aged. It reminded me of a hoppy lager with a pilsner finish; it makes for a very tasty session brew. END_OF_DOCUMENT_TOKEN_TO_BE_REPLACED

These photos were taken Friday at Three Weavers Brewing Company during their bottle release party for the official beer of the 2016 LA Beer Week, Unity. Unity is an “experimental IPA” in that it used a lot of an experimental hop so new it does not have a name yet, other than HBC 522. It got the name Unity because while it was brewed and bottled at Three Weavers, many members of the L.A. County Brewers Guild participated in the brew. While it has been said that too many cooks spoil the broth, that was definitely not the case with Unity. Unity is a delicious resinous American IPA with a slight sweetness in the finish.

Admittedly, I do not get over to Three Weavers as frequently as I might like but it is pretty obvious that they are doing quite well. I arrived early to the event and the tasting room was already packed with more people coming in the entire time I was there. Another sign of success is the growth of the brewery itself which will be seeing a new, larger brewhouse in the upcoming weeks. Congratulations to Lynne Weaver, Alexandra Nowell and the entire staff at Three Weavers.

Speaking of the 8th Annual LA Beer Week, the event runs from June 18-26 and begins with the kickoff festival which will be held Saturday, June 18 at the Los Angeles Center Studios. All 45 brewery members of the Los Angeles County Brewers Guild will be represented along with about 30 other craft breweries from around the state. If you missed last year’s kickoff event you missed a great time and this year’s event promises to be even bigger and better; you do not want to miss it. While this year’s event will be bigger, they will not be selling additional tickets so do yourself a favor and buy your tickets today. You can get more information and purchase your tickets at LABeerWeek.org. Cheers! END_OF_DOCUMENT_TOKEN_TO_BE_REPLACED 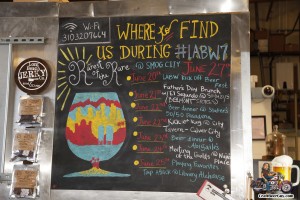 It has been a week or so now since LA Beer Week 2015 (LABW7) and I think I am ready to give a review of the “week-long” event. I say “week-long” because LABW7 officially ran from June 20-28 but some venues started celebrating early and others ended on the 27th. Heck, Smog City Brewing held their Unity (the official beer of LA Beer Week) bottle release on the Wednesday before, and Absolution Brewing released their LA Beer Week brew, AD/JD on Thursday. No matter when you started, it was a very long week with some very good beers to be found. There are a few events I attended but did not write about; if you want to see those photos please visit my Facebook page.

The LA Beer Week Kickoff Party was held Saturday, June 20 at Exposition Park. I have to be honest, even though I have been documenting LA Beer Week since LABW4 in 2012 I have never attended any of their kickoff events. This was due primarily to preconceived misconceptions of what a madhouse it would be; plus I really do not like driving to DTLA. On the Wednesday before the kickoff party I happened to notice an email that came in from Absolution Brewing to members of their Mug Club in which they were offering VIP tickets to the first five “Muggers” that asked for them. I asked Tanya if she wanted to go and she responded immediately with, “No!.” This was because I had been saying we were not going for the past week, so I think she was just making sure I knew she was okay with it.

As I was going to the Torrance City Hall that night anyway for a Planning Commission hearing and Absolution was basically on the way home, it was decided that we would stop by after the Planning Commission hearing and see if any passes were still available. In other words, I was going to let others have an opportunity to score the passes before me. We showed up to Absolution shortly before they closed and no one had claimed any of the passes, so we decided to attend the kickoff. 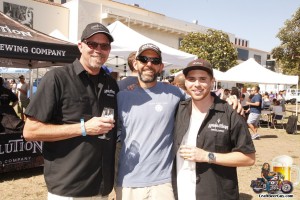 Thank you to Absolution Brewing for the VIP passes