This was my first time attending Beer Camp, and while I had heard some negativity about last year’s event, it was pretty evident to me that they had learned from whatever mistakes those were as this was truly an amazing event to close out LA Beer Week. While I did not make the effort to count all the breweries in attendance, there were reportedly at least 100 breweries, pouring well over 200 beers. In addition to the beer, there were a dozen food trucks, live music from The Expanders and Orgone, games, plenty of shade and much cooler temperatures than the 100+ degree weather we experienced at the kickoff festival last week. END_OF_DOCUMENT_TOKEN_TO_BE_REPLACED

While I do not have the final numbers, it seemed like there may have been people in attendance on Friday night than Saturday afternoon; I doubt if either session had more than a couple hundred people in attendance. The only line I recall seeing that had more than four people in it were the first few people that arrived Saturday and headed straight for the Agrestic. I would not be surprised to see this event go back to being a one session deal. END_OF_DOCUMENT_TOKEN_TO_BE_REPLACED 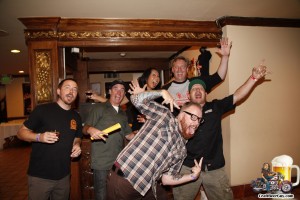 It has been a real pleasure watching the evolution of this craft beer festival; the first one in 2012 had almost as many beers as attendees but attendance has increased every year since. In 2014 it was decided to hold the event over the course of two sessions and it worked very well. Last year each session had different special beers; this year both sessions will have every beer. When asked how they would ensure that certain beers were not tapped out on Friday, leaving Saturday’s attendees without, I was told that they would be monitoring lines and weighing kegs if that became an issue. END_OF_DOCUMENT_TOKEN_TO_BE_REPLACED

Monday May 12 was day one of the 9th Annual American Craft Beer Week, and it is the third consecutive year that I have covered the event. In 2012 I participated by trying to find as many American craft beer locations as possible in the South Bay. In 2013 I set out to visit as many Great American Beer Festival gold medal award winning breweries as possible. Since there has been such an explosion of growth in the craft beer sector around here, I decided that this year will be devoted to the local craft breweries, brewpubs and gastropubs.

I started off by visiting San Pedro Brewing Company (SPBC), a brewpub that has been around for close to 15 years. They have won more than 40 medals at local county fairs, commercial beer competitions and international beer festivals. They have not entered competitions such as the Great American Beer Festival because they have a small brewing system and do not currently have the capacity to brew enough beers to handle the increased demand winning a competition like that would bring. That may soon change though as they are in the process of dealing with the paperwork to open a new location around the corner which will be called Port Town Brewing. SPBC Head Brewer Jason Welke will likely do the brewing for SPBC and Port Town with the SPBC system being used for experimental batches. The hope is to have Port Town Brewing open by next American Craft Beer Week. For those that like bourbon barrel aged brews, Wednesday evening at 6:30 SPBC will have their 2nd Bourbon Barrel Aged Beer Night featuring their Blitzen Belgian Winter Ale and Sunken City Imperial Stout. I went to their first barrel aged event in February and they had some delicious brews. If you are looking for something to do, you really cannot miss by attending this event. San Pedro Brewing Company is located at 331 W. 6th Street in San Pedro and is open seven days a week. END_OF_DOCUMENT_TOKEN_TO_BE_REPLACED

A visit to the Alpine Beer Company Brewpub

When we left Arizona and headed back home I programmed a slight detour into my car’s GPS system as we took the long way home and headed to Alpine Beer Company, in Alpine, California. As you will likely notice, the photos in this gallery were taken over the course of two separate visits to the Alpine Beer Company brewpub. The first time I went there was last year when I was returning from a trade show, the experience was fun enough that I made a second 100+ mile detour to return there last week.

My first experience that I recall trying an Alpine Beer Company beer was at a bottle share in 2012 when someone brought a growler of Nelson IPA. I was so impressed that whenever I am anywhere close to Alpine, CA I do what I can to go to the source. As fate would have it, both times that I have gone there it has been a Sunday which means the brewery itself is closed. “Settling” for the brewpub is hardly a bad thing as their food, home-style barbecue, is pretty good if you like barbecue but the beer is what is my draw. While I am always pretty vocal about “Top 10” lists and how they are pretty useless when it comes to beer; I will admit that I do look at them once in a while. In my opinion, a Top 10 IPA list that ignores Alpine Beer Company just confirms that my general opinion of Top 10 lists is dead on.

Since it was getting a little late in the day we did not have the time to sample all 10 beers that they had available that day, but we did order a brisket plate and a small flight consisting of the McIlhenney’s Irish Red, Captain Stout, Pure Hoppiness IPA and an Odin’s Raven Imperial Stout. While the Pure Hoppiness was naturally my favorite, all four were very solid brews and the Odin’s Raven was particularly delicious. The downside of the brewpub is that they do not do growler fills, so we grabbed several bottles to bring home. END_OF_DOCUMENT_TOKEN_TO_BE_REPLACED