Despite the low attendance, everyone there seemed to be having a great time with plenty of craft beer and no lines. The next Laughs By Volume will likely be held in the Inland Empire with shows in Redondo Beach and Phoenix, Arizona following shortly thereafter. Cheers! END_OF_DOCUMENT_TOKEN_TO_BE_REPLACED

This event is perfect for those of you that enjoy going to comedy shows and enjoy craft beer. When you go to a comedy club you can count on a $25.00 cover charge with a two drink minimum; with Laughs By Volume 5 tickets are $25.00 online (before your discount), with unlimited pours of craft beer while enjoying the comedy; the past four events have been great. END_OF_DOCUMENT_TOKEN_TO_BE_REPLACED

As Laughs By Volume is about the comedy as much as it is the beer, we were treated to about an hour of standup provided by Martin Montana, Daniel Storrow, Jeff Capri, Lance Paullin, Melissa Shoshahi, and Chad Shapiro. It was pretty obvious that the audience enjoyed the show as much as they did the craft beer. END_OF_DOCUMENT_TOKEN_TO_BE_REPLACED

If your idea of a beer festival is something like BAM Fest, Taste of Brews or the Firestone Invitational, Laughs By Volume may not be the event for you. Yes, it will be cheaper; and there will only be 100 people there so there won’t be any lines. It is inside so weather is not an issue and there is plenty of seating; but there may not be as many beer varieties available. The upcoming Laughs By Volume II will feature about 36 or 37 beers from 25 breweries. Here is the list as of the moment. END_OF_DOCUMENT_TOKEN_TO_BE_REPLACED

The comedians that will be featured include Geoff Keith who has been seen on Comedy Central, HBO and MTV; Jonesy who has been on David Letterman, MTV and VH1; and MoMo Rodriguez who has appeared on the Carlos Mencia Tour. Also performing will be Graham Currin from Comedy Time TV, Ryan Higgins who competed on TBS’s National Comedy Competition; and Laura Crawford. END_OF_DOCUMENT_TOKEN_TO_BE_REPLACED 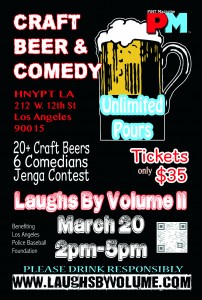 When I mentioned that there was going to be a series of these events the plan was to use different venues around Southern California. It was decided that this was a little too ambitious for a new venture, so it was decided that they would keep these shows a little more local to the Greater Los Angeles area. Laughs By Volume II will be held at Honeypot LA instead of out in Chino. END_OF_DOCUMENT_TOKEN_TO_BE_REPLACED

Comedians scheduled to appear include Evan Wecksell, Sammy Obeid, Jason Love, Atsuko Okatsuka, Jonesy and Stevie Mack. These guys have been on everything from MTV to David Letterman so it should be pretty fun. END_OF_DOCUMENT_TOKEN_TO_BE_REPLACED