If your idea of a beer festival is something like BAM Fest, Taste of Brews or the Firestone Invitational, Laughs By Volume may not be the event for you. Yes, it will be cheaper; and there will only be 100 people there so there won’t be any lines. It is inside so weather is not an issue and there is plenty of seating; but there may not be as many beer varieties available. The upcoming Laughs By Volume II will feature about 36 or 37 beers from 25 breweries. Here is the list as of the moment. 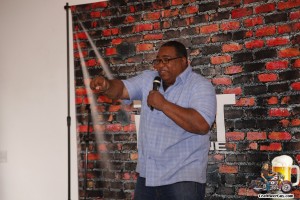 Comedy AND Unlimited craft beer at Laughs By Volume

If you like going to comedy shows and you like craft beer, this is exactly the event for you. If you think about how much it would cost to get into a comedy show with six acts, then include the two drink minimum it would be impossible to get out for $25.00; you would be lucky to get in for $25.00. Laughs By Volume is $35.00 at the door or $25.00 if you purchase your ticket online and you can save 10% by using Discount Code: CBG10. Instead of a two drink minimum you are given unlimited pours in your commemorative PINT glassware; translation, they are liberal pours.

The comedy is top notch as well; with a lineup as good as anything I have seen at a comedy club. Sunday’s Laughs By Volume II will feature Geoff Keith who has been seen on Comedy Central, HBO and MTV; Jonesy who has been on David Letterman, MTV and VH1; and MoMo Rodriguez who has appeared on the Carlos Mencia Tour. Also performing will be Graham Currin from Comedy Time TV, Ryan Higgins who competed on TBS’s National Comedy Competition; and Laura Crawford.

On top of everything else, the Laughs By Volume series is a fundraiser; not only do you get to drink good beer while laughing your butts off, you are doing it for a good cause. The beneficiary of Sunday’s event is the Los Angeles Police Baseball Foundation. With a goal of positively impacting the lives of our youth one child at a time, the foundation helps children throughout the Los Angeles Metropolitan area.

If beer and comedy is not enough, at Sunday’s show they will also have a foosball tournament where you can win VIP tickets to the next Laughs By Volume, and they will have a Jenga contest.

As an additional discount, LYFT is providing free rides to and from Laughs By Volume for those within 7 miles of the venue. If you live further then you will receive a discounted ride. To get the discount, simply enter code PARTYCAR after clicking payment.

If you cannot make it, I hope to see you at the next one in April. Cheers!