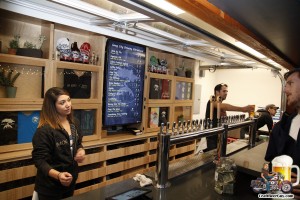 Just a bit of trivia; while there were about 50 LA County Brewers Guild members in January of 2017, today there are almost 70! END_OF_DOCUMENT_TOKEN_TO_BE_REPLACED

It is an end of an era for the Los Angeles craft beer scene as long time craft beer photographer and general all-round nice guy, Bernie Wire enters his last few days as a Los Angeles resident.

Saturday afternoon, a steady stream of Bernie Wire fans and friends came to El Segundo Brewing Company to bid farewell to Bernie as he and his wife Anne Marie prepare to move back to Minnesota; Anne Marie hails from the Land of 10,000 (closer to 12,000 actually) Lakes, so they have plenty of family out there.

Bernie took time to visit with everyone that came out, and then treated us to a little concert. After the concert, I noticed lots of tears in the tasting room as people began to realize that this was really good-bye. END_OF_DOCUMENT_TOKEN_TO_BE_REPLACED

Sunday afternoon, February 23, the LA Beer Bloggers held their 10th LA Beer Bloggers Summit, this time at one of my favorite local microbreweries, Smog City Brewing Company. The LA Beer Bloggers are a group of craft beer aficionados that promote craft beer either professionally or as a hobby. The summits are held every month or so at various breweries, brewpubs and gastropubs in the greater Los Angeles area. These events give the writers and photographers an opportunity to network with others that have the same passion for craft beer and to experience new locations they may not have visited before.

Today’s event included a panel on photography and how it is utilized as a marketing tool to promote businesses that are too new to afford a marketing team. The panel, moderated by John Michael Verive, featured Joshua Liberman from The Tao of Photography; Bernie Wire of Friends of Local Beer, Laurie Porter of Smog City and Tyler Graham from the Stone Brewing Company marketing team. Their discussion included topics such as how they got into photography, the use of social media, favorite tools and methodologies. Of course there was lots of networking and plenty of great beers. Cheers! END_OF_DOCUMENT_TOKEN_TO_BE_REPLACED

I Shoot Beer People – A Tribute to Bernie Wire

Have you ever seen the movie Memento? That is kind of what my life seems like at times. If I took your photo I will remember your face, which does not necessarily mean I will remember your name; but it is a start. While I have been taking photos of beer and breweries and anything else that was in my view for many years, I only recently got into taking photos of the local craft beer scene relatively recently; primarily because the craft beer scene around here is pretty new. When I really became aware of what was happening in the South Bay was during American Craft Beer Week in 2012. My girlfriend had changed the meds she had been on and could now enjoy a brew or two with me, so we dove into the new South Bay craft beer scene.

On day two of the 7th Annual American Craft Beer Week, May 16, 2012 I was in Select Beer Store in Redondo Beach and I saw this guy taking a photo of his beer. I was not ready to catch it as it was happening so I asked him if he would oblige me by reenacting the shot for me. Little did I know that we would continue to run into each other and eventually become friends. As it turned out, not only do we both enjoy craft beer, we both like to promote local breweries and we use photography to accomplish this. This was the first time I met Bernie Wire.

Bernie is kind of a legend in these parts and Tuesday evening Mohawk Bend, a gastropub with [a reported] 72 different craft beers hosted an art exhibit of some of Bernie’s works. The photos were nice, but I think Bernie would be the first to admit that the turnout is what really made this event. It is not easy driving out to Los Angeles in rush hour traffic, but people were eager to show their support and appreciation to Bernie. It was a very nice event attended by great people. END_OF_DOCUMENT_TOKEN_TO_BE_REPLACED