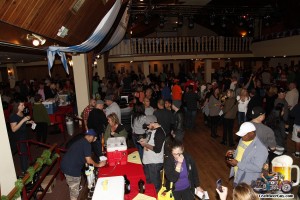 While some past beer festivals have been less than successful with having multiple sessions, Alpine Village has something going for it that most beer festival promoters do not have; the ability to cellar beers. Last year there were discussions about having two sessions, but the real possibility of running out of “all the good beers” caused them to re-think the idea and have just one session. This year, more planning has been made to ensure both sessions have plenty of access to really good beer. For example, Alpine Kraft Bierfest will feature eight beers from Allagash; Fluxus 2014, Golden Brett, Interlude, James Bean, Red Howe’s, Saison Rye, Victor and Victoria. Four of them will be available at the first session on Friday and the other four will be at the second session on Saturday. And it is not just Allagash; Anderson Valley will have three split up over two days, Figueroa Mountain will have four, Stone will have eight and The Bruery will have five split between Friday and Saturday! The published beer list is only a partial list but I think it proves what I say when I mention that Alpine Inn at the Alpine Village is one of the best kept secrets when it comes to craft beer. You never know what they are going to pull out of the cellar.

If you purchase your tickets online by October 31, 2014 you will automatically receive an “early-bird discount” of $7.50 per ticket. If you use the Craft Beer Guy PROMO CODE of Crafty77guy you will receive an additional $2.50 off for a total savings of $10 per ticket. There will be a new discount beginning November 1 but it will be less than the $10 you will save by buying your ticket now.

UPDATE: Effective November 1 through November 14 – The discount will be $7.50 using PROMO CODE: 7craftyguy7 – Good for the first 100 tickets

I have been asked about the possibility of this event selling out and that is a possibility due to the fact that this event is held inside the Alpine Inn; so there are space limitations. I have been told that right now it looks like Saturday could definitely sell out with a maybe on Friday. I would highly advise taking a look at the Alpine Kraft Bierfest tap list and decide which session looks best to you and buy your tickets today while they are still available. Of course, attending both sessions looks pretty fun too.

Tickets can be purchased online at Admit One Products. Alpine Village Inn is located at 833 W. Torrance Boulevard in Torrance. Cheers!