As 2014 winds down I faced the question posed to me by a few people; “Will Craft Beer Guy be writing an article about the year?” Initially I thought I would do a Top 10 list and just discuss the Top 10 breweries and brewpubs in the South Bay. I figured it would be easy because there were only 10 craft brewers here, but in the last month so many new locations have opened that we now have 12 if you count Phantom Carriage that has not “officially” opened yet. The South Bay now has the following breweries and brewpubs in its confines; in order of seniority (I think) they are: Red Car Brewery, San Pedro Brewing Company, Strand Brewing Company, El Segundo Brewing Company, Monkish Brewing Company, The Brewery at Abigaile, Smog City Brewing, The Dudes’ Brewing Company, Absolution Brewing Company, King Harbor Brewing Company, Three Weavers Brewing and Phantom Carriage. 2015 should bring us a few more including Hop Saint, Brouwerij West and Port Town Brewing; and those are just the ones that come to mind. There will also be some moves and expansions among those listed above. With that I now present you The 2014 Craft Beer Guy Year in Review. 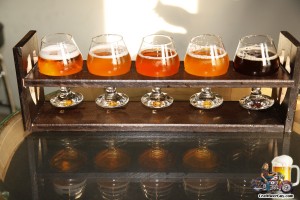 As I look through my articles from January I see that it was a pretty mellow month or the calm before the storm if you prefer. I would have to say my personal highlight of the month was a Sunday afternoon that we spent visiting several of the Orange County craft brewery tasting rooms and brewpubs. The day included stops at Bootlegger’s Brewery, Taps Fish House & Brewery, Noble Ale Works, Tustin Brewing Company and Brewbakers. Each of these stops were first time visits and I would not have a problem recommending any of them. The thing is, in the past year Orange County has opened so many new tasting rooms and brewpubs that it is getting tough to try and keep up with them all; but I will try. END_OF_DOCUMENT_TOKEN_TO_BE_REPLACED

On Saturday afternoon, members of The Bruery’s Reserve and Hoarders Society and their guests gathered at The Phoenix Club in Anaheim to join The Bruery and many of the best local craft breweries to celebrate The Bruery’s Sucréversary, or 6th Anniversary. The proceeds from the event were to benefit the Boys & Girls Club of Santa Ana.

Since this was a private event I was a little surprised at how many attendees there were; this beer festival easily rivaled any of the local beer festivals I have attended in recent memory both in the number of people attending and the breweries represented. I got there a little early and even though they were not yet pouring beers, there were four very long lines as The Bruery had scattered three booths and a beer truck around the venue and their fans took advantage of the beer map to get in line for their favorite Bruery offering. To say there was a lot to choose from would be a definite understatement as The Bruery brought such ales as their Griffon Bruxellois, Oui Oui, Premiere, Batch #50, Confession, Sucré – Tawny Port, Grey Monday, Hottenroth, ORB, Grey Monday and many others. They even brought out some special beers such as Three Floyd’s 2013 Dark Lord.

For the second installment of my mapped self-guided craft beer tours, I will map out a beer tour I made of Orange County back in January. If you would like to see photos of the locations visited on this tour, you can find my photos and comments here. For the uninitiated, please be aware, there are a lot more craft breweries in Orange County than these; in fact, there are new locations that have opened since I wrote the initial article in January. I chose to visit those locations simply because I had never been there before; I chose the order for a couple of reasons. The first is that individual one day tours are going to start and end at home, so I always try to make the journey circular. You should be able to plug in your own home address and create your own circle by using the same order I have them laid out in; even if you start with Location C instead of Location A. The second thing I take into consideration is food; so I try to include at least one brewpub and I do my best at avoiding two in a row.

END_OF_DOCUMENT_TOKEN_TO_BE_REPLACED

A visit to Orange County microbreweries and brewpubs

At the beginning of the month I paid a return visit to Anaheim Brewery during which time I happened to get into a conversation with a couple that came into the tasting room. While our conversation naturally began with discussing the beers we were sampling, it did not take long for it to switch to our favorite local craft breweries. It was during this discussion that it dawned on me that I had barely skimmed the surface when it came to how many craft breweries in Orange County I had visited. This past weekend I decided to do something about it by visiting a few production breweries and brewpubs in the OC.

Tanya and I started off at Bootlegger’s Brewery, a production microbrewery located in Fullerton, CA. I must admit, I was a little surprised when we pulled up to the tasting room because it appeared to be extremely small from the front. When we went inside I saw close to 20 beers available on tap; it was then that I figured out that the brewery and the tasting room were at two different locations. Since I knew we would be making several stops over the course of the day, we opted to share a flight of four for a very reasonable $6.00. The flight consisted of a Sucker Punch IPA, Miss Double D Pale Ale, Double Dry Hopped Palomino Pale Ale and a Spiced Black Phoenix on cask. Bootlegger’s Brewery is open seven days a week and have bottles and growlers to go. While they are a production brewery they do not offer food, but you are welcome to bring food in. I noticed a pizza place next door. They have a very large patio area and there was a private party going on in one section so I think it is safe to say that if you want to have a party there, it can be arranged. The Bootlegger’s tasting room is located at 130 S Highland Avenue in Fullerton.

After enjoying Bootlegger’s we headed out to Brea and Taps Fish House & Brewery. As can be guessed by the name, Taps is a brewpub; in fact, it is a huge brewpub. The first thing I noticed, besides the large number of guests, was the number of awards that Taps Brewery has on the walls. Apparently Taps opened in 1999 and it looks like they have been consistently winning medals for their beers ever since. Since football was on, the place was packed and finding seating for two at the bar was not going to happen. We found a couple seats at one of the bars community tables and sat down to enjoy a Reuben sandwich and we split another flight. The flight was made up of an MJoe mead, Seaward Pale Ale, Azacca IPA and a Neo-Colonial Stout. I am becoming a big fan of Azacca hops, that is for sure. Taps Fish House & Brewery is located at 101 E Imperial Highway in Brea and they are also open seven days a week. END_OF_DOCUMENT_TOKEN_TO_BE_REPLACED