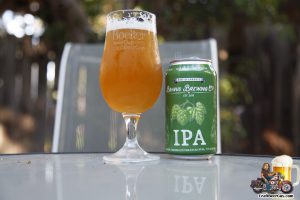 Bravus Brewing, out of Santa Ana, California, is the first brewery in the United States to brew solely non-alcoholic beer. If you are as old as me and your only experience with non-alcoholic beer was with Near Beer, you might ask, “Why bother?” For Bravus founder Philip Brandes it was two-fold. Firstly, Brandes’ brother was a sales rep for a brewery and would take him to various beer fests where he first learned about the craft beer craze. Secondly, and I think probably more importantly, he spent a weekend in Mexico with a friend that brought the only non-alcoholic beer he could find, Sharp’s and O’Doul’s. That was enough to convince Brandes that something had to be done. END_OF_DOCUMENT_TOKEN_TO_BE_REPLACED

For the second installment of my mapped self-guided craft beer tours, I will map out a beer tour I made of Orange County back in January. If you would like to see photos of the locations visited on this tour, you can find my photos and comments here. For the uninitiated, please be aware, there are a lot more craft breweries in Orange County than these; in fact, there are new locations that have opened since I wrote the initial article in January. I chose to visit those locations simply because I had never been there before; I chose the order for a couple of reasons. The first is that individual one day tours are going to start and end at home, so I always try to make the journey circular. You should be able to plug in your own home address and create your own circle by using the same order I have them laid out in; even if you start with Location C instead of Location A. The second thing I take into consideration is food; so I try to include at least one brewpub and I do my best at avoiding two in a row.

END_OF_DOCUMENT_TOKEN_TO_BE_REPLACED

A visit to The Bruery

I know there are many that would consider it heresy for a craft beer fan to say this; but when it comes to sours, I have never been a huge fan. Truth be told, I was never much of a fan at any level. The first sour I recall trying was at a bottle share at Sophie’s Place I attended a couple years ago. I took one sip and immediately poured the rest of the taster into the spit bucket. Other attendees looked at me with shock and informed me that I had dumped the most expensive brew at the event. What can I say; obviously my palate was not refined enough to enjoy an expensive sour.

Probably a year later, Smog City Brewing introduced me to their Quercus Circus; I found that to be a very nice entry level sour. I even ventured away from my standard taster pours and ordered a couple full pours. I felt more comfortable with sours and I was going to do my best to develop my palate to the point that I could enjoy them. It wasn’t too much after this that I went back to Sophie’s and the bartender offered me something from a growler he had bought at The Bruery; I discovered that my palate was not quite as developed as I had hoped.

As I attended more beer festivals I started getting a sour or two; some I liked, others not so much. Eventually I got to the point that I got bottles from Three Floyds and Russian River. I could see that I was learning to appreciate sours a little more each time. I even found myself enjoying the pours I got from The Bruery, no longer was it too much for me. END_OF_DOCUMENT_TOKEN_TO_BE_REPLACED