If you have are a regular reader you might recall that I attempted to visit Jackson Hole last year but was denied due to a forest fire. As I backtracked to Rock Springs I came upon Wind River Brewing, but they were too busy and after a significant wait, I left. Someone from there did reach out to me later and explained that due to the fire they were extremely busy, so I decided I would give them another chance.

When I left Rock Springs I headed north on US-191 for a nice, scenic 100 mile drive to Pinedale, home of Wind River Brewing. Wind River Brewing is a brewpub that has been open almost 20 years. As bust as it was last year, there was no problem getting service or a tour of the brewhouse this time.

Wind River Brewing Company is located at 402 W Pine Street in Pinedale. They are open seven days a week and offer growlers and some cans to go.

After leaving Pinedale I continued north to Jackson, also known as Jackson Hole. I figured I would have a few options for breweries to visit, but the downside to these tours is the business hours brewery taprooms are open. I wanted to visit Roadhouse Brewing, but the brewery did not open until 4:00 PM, while their brewpub opened at 11:30 AM, so I headed to the brewpub hoping they had a dog friendly patio; they didn’t. The bar I was at was not in use so they allowed me to check for a local motel that was reasonably priced; even in the off season this place is a little pricey. One of the bartenders called someone he knew, and sure enough, they had one room left; and it was only two blocks away. By the time I got settled in the room, it was going to be after 4:00 so I drove the two miles to the brewery.

The Roadhouse brewery is a massive operation; I really had no idea how large they were. They have a 30 barrel brewhouse, canning line and barrel room. The tasting room had nine taps available, so I created a flight consisting of their Highwayman Pilsner, Loose Boots Session IPA, Wilson IPA, and Regalia Saison. The Loose Boots was my favorite, but their pricing of $4 to $5 a pint kind of forced me to go ahead and have a pint of The Walrus IPA. While talking to the beertender I found out that the Roadhouse Pub & Eatery brews experimentals there; I figured I would go there later in the night (I didn’t).

The Roadhouse Brewing Company brewery is located at 1225 Gregory Lane in Jackson. They are open Monday through Friday, are dog friendly, and offer growlers, crowlers, and cans to go.

Since Snake River Brewing won a gold medal for their Dark Horse lager at GABF, and I had not been there since 2011, I figured I would go there for dinner. Snake River is a brewpub and is the oldest brewery in Wyoming. The place is huge and it was packed; even so, they told me to make myself at home and walk through the various rooms that make up the brewhouse.

As I was wandering around I ran into the head brewer; I could tell it was him because he was wearing his gold medal as he worked. He informed me that because of the setup of the building, there were fermenters all over the place, with some being next door with a canning line and barrel room.

After chatting and taking photos I found a seat where I could watch the 49ers and the Dodgers at the same time while eating and trying some beers.

Their flights are typically made up of eight 5oz pours, but I was not up to that, so I made one of their Snake River Pale Ale, Pako’s IPA, Dark Horse, and Nitro Zonker Stout. It was easy to see why Dark Horse took gold in the International-Style Dark Lager category.

Snake River Brewing is located at 265 S. Millward Street in Jackson. They are open seven days a week and offer cans to go. Cheers!

Back to Photos from Wind River Brewing, Roadhouse Brewing, and Snake River Brewery
[Show as slideshow] 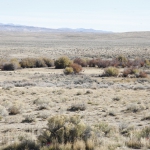 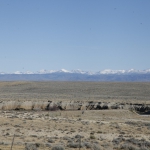 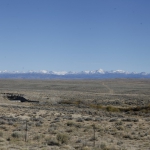 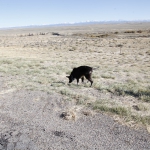 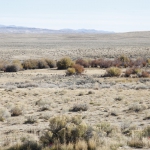 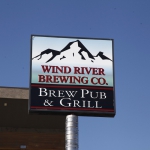 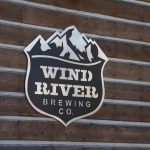 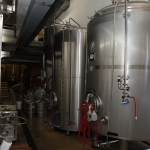 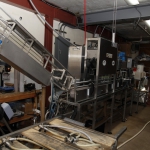 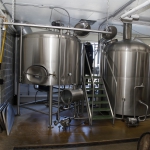 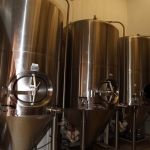 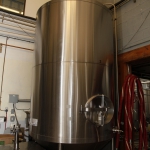 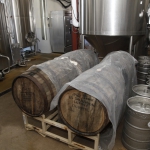 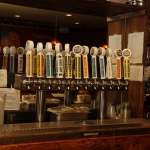 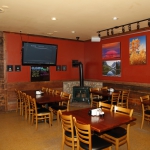 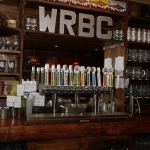 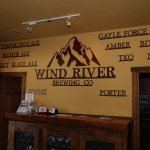 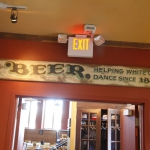 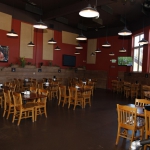 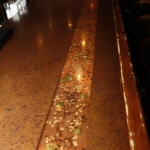 1 2 ... 4 ►
Back to Photos from Wind River Brewing, Roadhouse Brewing, and Snake River Brewery