A Visit to STACKED Torrance

Regular readers of my site may recall that back in March I visited a STACKED restaurant in Cerritos for a beer tasting put on by Craft Beer Guild Distributing. While we had a very good time exploring the STACKED menu and trying the various craft beers that had been presented, Cerritos is almost 20 miles from my home so the likelihood of my returning just for dinner was not very good. While we were at the Cerritos location I was informed that STACKED has four locations; Cerritos, Thousand Oaks, San Diego and Torrance, which is about five minutes from my home, so I made a mental note to check it out sometime.

As a result of my article the public relations company for STACKED began inviting me to events at their other locations; but as the invites were always to Thousand Oaks or San Diego the distance was just too far to justify the drive. After the last invitation I reminded them that I lived in the South Bay; I was then invited to visit the Torrance location. After a few emails back and forth, I was told to head over to the Torrance location and was given a couple names to ask for when I got there. When we arrived yesterday I found out that the two names were managers at the Cerritos location. This was not a good start.

Tanya and I went outside to decide where we would eat when Ashley Brown, manager for the Torrance STACKED came out and asked what brought us there in the first place. After hearing that there must have been a mix-up somewhere and not wanting to lose the opportunity for some exposure, Brown invited us back in.

While Tanya played with the iPad menu system used at all STACKED location to order a 90 Minute IPA for me and a Margarita for her, Brown came up to talk about STACKED and craft beer. Brown told me that he wanted to be sure he knew what he was talking about when it came to craft beer so he became a certified cicerone. I mentioned that even though it had been several months since I visited the Cerritos location, the beer tap list looked vaguely familiar. Brown informed me that the beer menus are fairly similar at each location but there are about six rotating handles that can vary according to the individual manager’s desire. In addition to the 16 handles they have a respectable bottle list to go along with their full bar and wines.

As I mentioned in my article about the Cerritos location, STACKED is all about building your own meal. This means fully customizable salads, burgers, pizzas or Mac ‘n’ Cheese. A problem with this concept is that it is very easy to build a meal you will need help consuming. Since this was already in the back of my mind we made a concerted effort to keep things relatively small so we could try a few things.

We started off with the Candied Bacon because it is just too good to pass up; yeah, we had it before and we do try to mix up our food intake but I will likely order this every time we go there. Tanya ordered a small bowl of chili which was okay, maybe a little sweet. Since October is “Garlic Month” at STACKED, their menu specials centered on dishes with garlic in them. We decided to create a pizza that featured roasted garlic then added a couple meats. I am not really a pizza guy but I devoured a major portion of it while enjoying a Simtra Triple IPA.

As I always let Tanya play with the iPad, I decided I wanted to try it and see just how user friendly it was for someone that was trying it for the first time. Naturally, I used it to create a flight. It was a simple matter to swipe and drag a Stone IPA, Ballast Point Sculpin, Knee Deep Simtra and Dogfish Head 90 Minute IPA for a nice hophead flight. If I was reading the menu right that flight only costs $7.00 which is a heck of a deal. Tanya spotted the “Adult Shake” section of the STACKED menu and ordered an Irish Cream Shake which is a vanilla shake with Baileys and rum. When I took a sip the first thing that entered my mind was the scene in Pulp Fiction when Vincent and Mia went to Jack Rabbit Slims’ and Mia ordered the $5.00 shake. Like Vincent said, “It’s a pretty fucking good milkshake.”

STACKED Torrance is located at 3525 W. Carson Street in Torrance. Since there is a lot going on at Del Amo these days and GPS is not exactly accurate anymore, they are in the section just south of Carson Street and west of Madronna. It is next door to P.F. Chang’s, across from the Lazy Dog and just north of BJ’s. They are open seven days a week at 11:00 AM. Cheers!

Back to Photos from STACKED Torrance
[Show as slideshow] 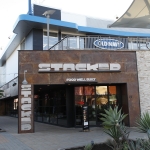 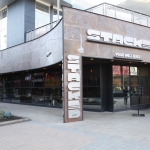 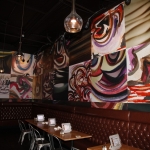 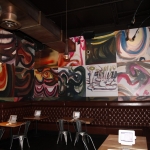 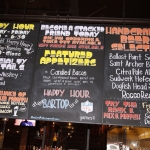 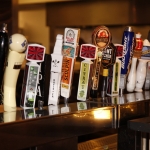 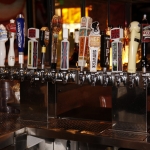 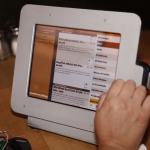 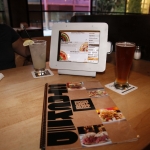 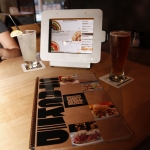 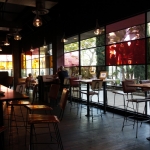 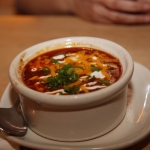 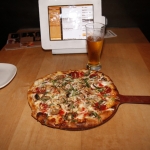 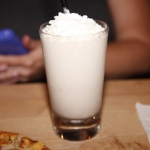 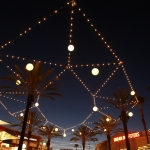 Back to Photos from STACKED Torrance