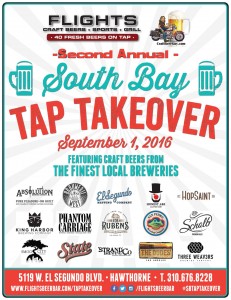 Those of you that attended our inaugural event last year will recall what a great time was had, with an amazing turnout; we had 40 taps of South Bay craft beer from 10 South Bay production breweries. This year we are going to make it even better by featuring 15 breweries from the South Bay.

New additions to the tap takeover include Brouwerij West, Honest Abe Hard Ciders, HopSaint Brewing Company, Rob Rubens Distilling & Brewing, San Pedro Brewing Company, Scholb Premium Ales, and State Brewing Company. I feel safe in suggesting that I am one of the few that have sampled brews from all the participants.

The tap list will have something for everyone. So far it is shaping up to be as follows (a couple beers are not quite ready so I cannot guarantee their attendance): 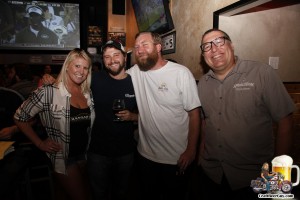 The only real problem last year was with the kitchen getting backed up due primarily to Flights offering their full menu with an extraordinary number of people ordering food. You cannot really blame people for wanting to try the freshly prepared to order food that Flights’ offers, it is delicious; but this year we have minimized the menu slightly to help speed things up. There will be various appetizers like fries, onion rings and artichokes, as well as salads, sliders, burgers and quesadillas. On top of that, the staff has an additional year of experience under their belt as Flights was only a few months old last time.

For those that remember last year’s t-shirts, we will have t-shirts again this year. We have four sizes; medium, large, XL and XXL. Quantities are limited; I suspect we will start giving them out around 4:00 PM.

This is not a ticketed event, there is no cover charge. Flights opens at noon on Thursdays and closes at midnight; I have been told that if the attendance warrants it, they will stay open until 2:00 AM for this event.

Flights is located at 5119 El Segundo Boulevard in Hawthorne; that is just east of the 405 freeway on the north side of the street. I hope you will join us; you have never had these 15 South Bay breweries under one roof. Cheers!