These photos were taken Tuesday and Wednesday, November 16 and 17, in Portland, Oregon, where I joined some friends for a 36 hour whirlwind craft beer tour. The breweries we visited included Von Ebert Brewing, Deschutes Portland Public House, Backwoods Brewing, 10 Barrel Brewing, Upright Brewing, Rogue Eastside Pub & Pilot Brewery, Cascade Brewing, and Deschutes Brewery PDX. As half of our crew had never been to Portland before, there were also some tourist stops, such as Pine State Biscuits, Voodoo Donuts, The Big Legrowlski, Kelly’s Olympian, and Poet’s Beach.

So yeah, this trip was a little (okay, a lot) different than 99.99% of the articles I have written about my travels, because this time I had zero say in what we did or where we went. My only decisions for two days were what beer I wanted, and what did I want to eat. I have not had so little responsibility since I was 17.

I flew to Portland early Tuesday morning with my friends Jeff, Yurany, and Jesse; we were there to celebrate a milestone for Jeff. He had never been to Portland, and was kind enough to ask me if I wanted to join them. Not being the type to turn a good time, combined with the fact that my Craft Beer Tour 2021 was cut short, I was all in. The fact that I was not going to have to decide where we went was just icing on the cake.

We arrived in Portland around 9:00 AM and we immediately took advantage of the fact that Jesse had apparently spent a lot more time in Portland than I had, because he immediately took us to the local rail terminal where you can get a ticket to ride the system for $5.00 a day. Considering the $40 that Uber would charge to leave the airport, it was a deal we could not pass up. Our entire time in Portland was done via the transit system, a little Uber, and 10 miles of walking over the two days.

While there is no question that Portland is a beer town, finding beer at that hour on a Tuesday can be a bit of a challenge. Luckily, my three traveling partners are all foodies, so I followed them as we ended up at Pine State Biscuits, upon Jesse’s recommendation. Now, it must be mentioned that there are several Pine State Biscuits in Portland, so Google it and verify which locations are open.

They have an interesting selection of biscuits, but it was far too early for me, so I tried their homemade pop tart. While they may specialize in coffee and biscuits, they also had a small, but respectable tap list; I opted for the Rosenstadt Vienna Lager since I don’t drink coffee.

The Pine State Biscuits location we visited is located at 1100 SE Division, in Portland. They are open daily, but close very early afternoon.

After eating and walking around a bit, we grabbed an Uber and headed over to Von Ebert Brewing.

Von Ebert is a brewpub, but obviously, having just eaten at Pine State, we were there for the beer. Von Ebert has an outdoor patio, but it was a little chilly so we took advantage of their tasting room. With 19 beers on tap to choose from, I had to make my second decision of the day. I made a flight consisting of their Citra Cocoon Wheat Beer, Petite Fury Session IPA, Volatile Substance IPA, Nothing Noble IPA, and Wolf Summoner IPA. While all were solid, Petite Fury was the standout, in my opinion.

The Von Ebert Brewing location we visited is located in the Pearl District at 131 NW 13th, in Portland. They are open daily and have several beer options to-go.

Deschutes is another brewpub, but at that hour of the day pretty much the only breweries that are going to be open are brewpubs; it is really the only consistent thing I have found since I started documenting my journeys. Let that be my pro tip to you; day drinking in a strange town is usually going to take place at a brewpub.

This particular location is massive compared to their Bend location. More than 20 brews on tap, a large food menu, and lots of merchandise are all on display and available for purchase.

Regular readers have probably noticed that I will get a flight when visiting a new brewery, but since I had visited their Bend location combined with the fact that I didn’t want to slow down progress, I opted for a full pour of Chasing Freshies. I learned later that this location actually brews a few options that were not available in Bend.

Deschutes Portland Public House is located at 210 NW 11th Avenue in Portland. They are open daily, have a happy hour, and offer many options for to-go beers.

After finishing our beers, we made the trek (203 feet according to Google Maps) to Backwoods Brewing, which is next door to Deschutes.

Backwoods Brewing is another brewpub, but they are based out of Carson, Washington. On the day of our visit they had 15 brews on tap to choose from. I set up a flight consisting of their River Pig Lager, Mosaic Pale Ale, Logyard IPA, S’mores Stout, Ridge Run Stout, and Rough Currant Sour. The Mosaic Pale Ale and Rough Currant were my favorites, but all were enjoyable enough that we picked up a bottle of The Stumbler Russian Imperial Stout to be enjoyed later.

Backwoods Brewing Company is located at 231 NW 11th Avenue in Portland. They are open daily, have a happy hour Sunday through Thursday, and have several beers offered to-go. Backwoods has a food menu consisting of appetizers, burgers and sandwiches.

After a quick visit to a part of Portland that has lots of food trucks, we headed to our hotel to drop off our luggage and rest our feet a little before we headed out again; this time, to another brewpub, 10 Barrel Brewing.

Yeah, I know, not exactly an independent brewery, or my first choice, but sometimes one must bite the bullet. 10 Barrel was chosen for the food and the $10 flights for 10 tasters.

When I returned to our table after taking photos, everyone had ordered flights, so to avoid causing delays I got one too. Unfortunately, unlike the Boise location, there was only one preset flight option. I will be honest; I was pretty disappointed in the flight, with the only memorable brews being their Soft Core Cider, Dementors Kiss Schwarzbier, and the Chai Chocolate Stout. Everyone seemed to enjoy the pizza and meatballs.

10 Barrel Brewing is located at 1411 NW Flanders in Portland. They are open daily, have an extensive food menu, and have several to-go options for their beer.

After dinner we headed across the Williamette River to Upright Brewing, a microbrewery with a tasting room featuring hand-crafted, small batch draft and bottled beers. On the night of our visit they had about 11 brews on tap, with two cask options. I opted for their Saison du Miel as my last beer of the day.

Upright Brewing is open daily, and has food available on game days and when they hold special events. They are located at 240 N. Broadway in Portland. They have a cozy tasting room and an outdoor patio. They have some bottles available to-go.

Since it was Jeff and Yurany’s first visit to Portland, we had to do a couple touristy things, like hit up Voodoo Donuts and The Big Legrowlski before heading back to our hotel for the night.

Wednesday morning started off nice and easy, with a walk along the Williamette, a stop at Kelly’s Olympian (a cool bar with lots of motorcycles and cool stuff hanging on the walls and ceiling, see page 6), and a visit to Poet’s Beach. After coffee, a couple shots, and some fresh air, we collected our stuff and started working our way back to the airport; taking the scenic route.

Our first brewery stop of the day was Rogue Eastside Pub & Pilot Brewery, which should be self explanatory, but yes, it is another brewpub and it is also Rogue’s pilot brewery.

On the day of our visit, they had 23 of their own beers, a couple non-alcoholic sodas, and 16 of their famous “original 19”; those are 19 local guest taps that their predecessor, the Green Dragon Bistro & Pub opened with. With all those options available, I started the day easy with a Colossal Claude DIPA; I was not disappointed.

For those that only know Rogue by Rogue Brewing or Rogue Ales, might be surprised to learn that their actual name is Rogue Ales & Spirits. As we were still celebrating, we tried some of their Dead Guy Whiskey; it was pretty tasty.

Rogue Eastside Pub & Pilot Brewery is located at 928 SE 9th Avenue in Portland. They are open daily, have an extensive food menu, outdoor seating, and have lots of beer to-go.

You know how sometimes people save the best for last? Well, that might be the case, even if unintentional, as we walked around the corner to the Cascade Brewing Barrel House.

Their website suggests they offer “at least 20 sour beers on tap at any given time, with another two taps reserved for sour beers straight from the barrel. The remaining taps pour Cascade’s non-sour beers.” I neglected to photograph the menu, so I can only go by their website and what I ordered, which was their Cascade IPA, Alternative Expression IPA, Baked Apple Sour, finishing off with their 2013 Bourbonic Plague. Bourbonic Plague was probably the best beer of the entire trip.

Cascade Brewing Barrel House is located at 939 SE Belmont Street in Portland. They are open Wednesday through Sunday with indoor and outdoor seating. They offer a limited food menu and food and beer is available to-go.

Sadly, our time in Portland was drawing to a close and we were cutting it a little short, so instead of public transportation we took an Uber to the airport which had a positive side to it in that Deschutes Brewery has a location at Concourse D, which happened to be where our flight home would take off from.

The airport location offered eight brews from Deschutes as well as food and a full bar. If you are going to be stuck in an airport for a while, I cannot think of a better way to spend it than at a craft brewery’s satellite tasting room.

I am not sure what the rest of the airport offers, but if in Concourse D, Deschutes is a pretty easy choice.

Once again I would like to thank Jeff, Yurany, and Jesse for inviting me to join you guys; I had a blast. Cheers! 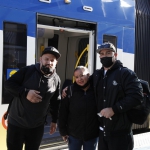 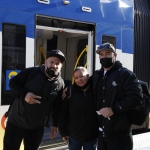 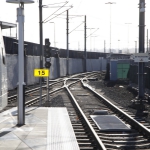 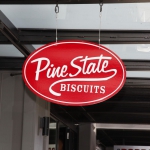 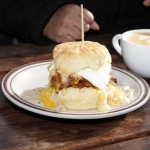 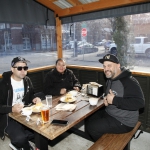 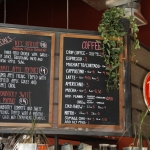 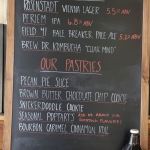 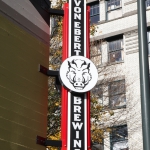 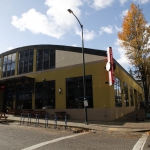 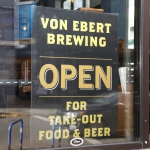 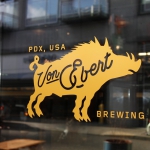 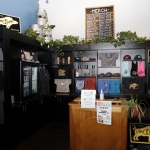 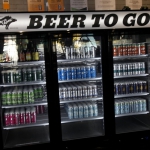 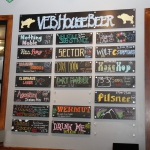 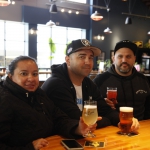 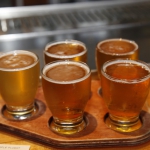 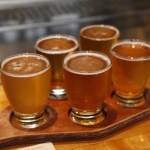 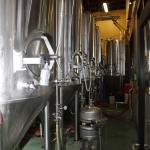 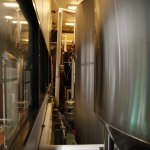