These photos were taken Friday in Huntington Beach, where I did a small craft beer tour with my friends, Jeff and Yurany. We visited Riip Beer Company, Flashpoint Brewing, and Beachwood Brewing.

Those of you that were following my Craft Beer Tour 2021 may have noticed that it had a pretty abrupt ending; as a result, I decided that instead of driving thousands of miles to visit new breweries, I would try to fit in a few day trips to breweries that were a little closer. As Jeff and Yurany had the day off, we decided to venture out together to Huntington Beach.

Our first stop was Riip Beer Company; primarily because they were the first one to open and we did not have all day.

I have visited literally hundreds of breweries, many in industrial parks and a few strip malls, but when we pulled up to Riip I was immediately impressed as they are obviously in a high rent neighborhood, and the location looked classy from the parking lot; the classiness extended from the parking lot, to the brewhouse, to the taproom.

The brewhouse is a 10bbl system, but if you look closely, there are two pipes that leave the brewhouse up into the ceiling. Those pipes end up on the other side of the tasting room where you will find four 30bbl fermenters and a brite tank that I forgot to ask about. I did not notice a canning line, so I am not sure if a mobile canner comes in, or I just missed it.

On the day of our visit they had 18 beers and a cider on tap; as I am a big fan of Riip and I know their head brewer, Ian McCall, earned his stripes at Beachwood, I was confident that I could make up a nice flight. I did. It consisted of their Things for Your Dom kolsch, Strataday Afternoon Blonde Ale, Cache is King IPA, and Dan.K IPA. Hands down, Cache is King was my favorite of the flight. As I was not driving, I took advantage of the situation and got a half-pour (yes, they have them) of Donnie Danko, an outstanding Imperial Red Ale.

Riip Beer Company is located at 17214 Pacific Coast Highway in Huntington Beach; they are in the strip mall across from the Jack-in-the-Box that’s on the beach. Riip is open daily at 11:00 AM, and they have a spacious tasting room along with a dog friendly patio. They do not offer food but there are plenty of restaurants around them and you are welcome to bring food. They offer cans and crowlers, and will fill growlers to-go.

Our next stop was Flashpoint Brewing Company; a brewery I was unfamiliar with, but Jeff was. The reason Jeff knew about Flashpoint is that Jeff and Yurany are both managers at In-n-Out, and Pat, the founder/brewer of Flashpoint, worked at In-n-Out for 40 years before retiring as a division manager, and opening Flashpoint.

Having friends that work and In-n-Out, I have learned that there are three things that are very important there; customer service, cleanliness, and quality. I know that Jeff was interested in seeing how 40 years of this philosophy translated to Flashpoint; they did not disappoint. The facility was very clean (even caught Pat’s wife cleaning windows), the staff was friendly, and the beer was delicious, which all three of us figured had to be because of the water filtration system.

They had about 20 beers and a seltzer on tap, so after taking photos of the brewhouse I sat down to make a flight consisting of their Anchor Point Pale Ale, Churchill Browns Kentucky Common, Beer is Food Too IPA, German Pilsner, and Non-Compliant DIPA. I don’t know that I had a favorite, but the Churchill Browns and the German Pilsner were great. I tried their Coconut IPA also, which I do not typically gravitate to, but that was outstanding.

Flashpoint Brewing Company is located at 7302 Autopark Drive in Huntington Beach. They are open daily, have a dog friendly patio, and usually have food trucks. They offer 16 and 32 ounce crowler fills, and will fill your growler if it is prepared properly.

When we initially set out on our trip, we fully intended to head to Beachwood BBQ & Brewing in Long Beach, but while we were at Flashpoint, I was reminded that Beachwood Brewing was in the neighborhood. I had never been to the Huntington Beach location, and traffic could present an issue later so we headed over to Beachwood.

The Huntington Beach location has a spacious tasting room, and a large, dog friendly patio area. On Friday they had close to 20 beers available, including a couple from Beachwood Blendery.

As we were running short on time, I enjoyed a half pour of their Steely Jam IPA collaboration with Urban Roots; besides, I am well-familiar with Beachwood’s offerings, so I don’t do a lot of flights there.

This Beachwood Brewing location can be found at 7631 Woodwind Drive in Huntington Beach. They are open Wednesday through Sunday, and have plenty of canned and bottled options to-go. I think I saw a crowler machine and I am sure they feel growlers. I do not know the food truck situation, but I am sure you can bring food there.

I have not been to Huntington Beach in many years, but I will not wait that long the next time. All three of these gems were within seven miles of each other, so I would say while Huntington Beach may be Surf City; it is also a craft beer destination. Cheers!

Back to Photos of Huntington Beach Breweries
[Show as slideshow] 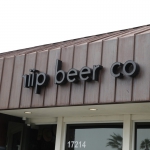 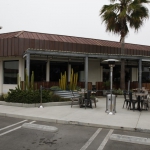 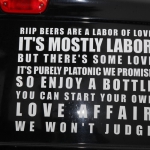 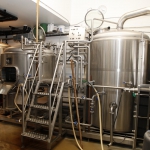 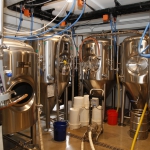 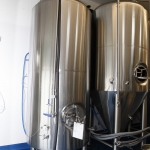 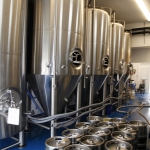 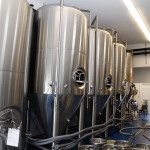 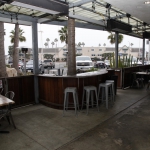 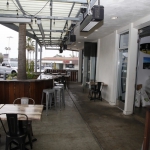 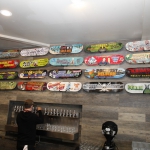 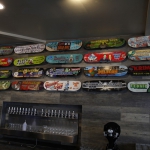 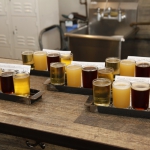 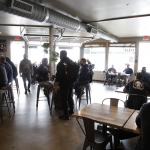 1234►
Back to Photos of Huntington Beach Breweries