Photos from the Media Preview of California Sun

These photos were taken Tuesday evening at California Sun, a new gastropub in the Silver Lake area of Los Angeles. California Sun is part of the Artisanal Brewers Collective, a restaurant group co-founded by Tony Yanow, formerly of Golden Road Brewing. California Sun features New York and Detroit style pizzas, for vegans, vegetarians and omnivores, as well as lots and lots of craft beer from around the country and beyond.

Anyone that knows me personally, or reads my site on a regular basis, is probably aware that pizza does not rank very high on my list of food choices; so what the heck was I doing at a pizza place that took over an hour of driving to get to? Well, there are three reasons actually.

The first is that with Tony Yanow’s name associated with it, I was relatively confident that there was going to be some good beer associated with it. Secondly, every once in a while I have events to cover out in that part of Los Angeles, so it’s nice to know where there best craft beer can be found in a neighborhood I have little knowledge of. And lastly, when I was doing research to decide whether or not I wanted to make the aforementioned drive, I discovered that not only would they have 14 rotating taps of craft beer, they also have more than 140 cans of craft beer that can be consumed on-site, or taken home.

When my friend and I arrived at California Sun, we lucked out and got the front parking spot in their small parking lot; we were off to a good start. We arrived about 15 minutes before the event was to begin, but the first thing I noticed when I opened my car door was the smell of garlic in the air. I may not be a pizza guy, but I do love my garlic; things were getting better and we had not even walked in the door yet. When I did walk in the door my eyes were immediately diverted to their beer cooler which looked like a piece of art, with what I was told was close to 180 different canned beers! Lots of love has been given to LA Brewers Guild breweries, some of which I am not sure I was aware even canned their beers. But don’t worry; if you wanted something not as local as Los Angeles, they had plenty to choose from. I saw brews from Colorado, Florida and the United Kingdom. The three doors of the cooler were broken down to IPAs behind the first door, with beers like pilsners, lagers and ambers behind the middle door, followed up with porters, stouts, sours, and soda for those that do not imbibe behind the third door.

On the other side of the room I saw their 14 tap handles. The 14 handles included several Russian River brews, some from Mikkeller, Green Cheek, Smog City and Cruz Fermentation Project. Four of the handles came from New Original Breweries, the name given to the four brewpubs that are brewing under the Artisanal Brewers Collective; Stalking Horse Brewery & Freehouse, 6th & La Brea Brewery and Restaurant, Bluebird Brasserie and Broxton Brewery.

While I do not consider myself a “foodie” by any stretch of the imagination, I am adventurous in my dining and don’t have a problem eating out of my comfort zone. While California Sun specializes in pizza, they also have what they call “Scoops and Salads” which include items such as a Beet Salad, Cali Chopped Salad, scoops of lentils, chicken, salmon and various other healthy sides; which I accepted to at least try them out.

After the salads had been sampled they began bringing out pizza samples. Not being a pizza guy, my pizza knowledge was pretty much limited to pan, thin crust, New York and Chicago styles. It has only been within the last 48 hours that I had even heard of a Detroit style crust; I have to say that I actually have a favorite style pizza now. The Detroit crust is thick, moist, and surrounds any toppings you may have put on it before putting it in the oven. If you have never tried one, I highly recommend it, and that is saying something coming from me.

The inside dining area probably seats about 30, with seating for another 10 outside on the covered patio. As the Detroit pizza is big enough to feed an army, and the New York pizza being 20″ in diameter, slices are the most common item on the menu. This means the menu may fluctuate a little from day to day. Besides slices, you can purchase a half or whole Detroit-style personal-pan pizza; if you want a New York pizza, you will have to call ahead to see what is available.

It is advertised that they have 140+ canned beers, which is good and all, but perhaps the best part is that you can create your own customized 4-packs or 6-packs to take home with you. I have a feeling that when I am in the neighborhood, that is exactly what I will be doing.

California Sun is located at 3903 Sunset Boulevard in Los Angeles and will officially open their doors on Monday, February 11. From that point on they will be open seven days a week. Cheers! 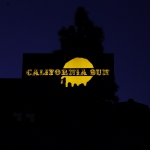 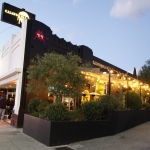 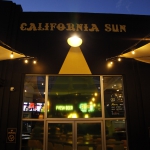 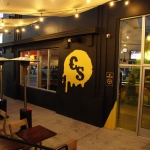 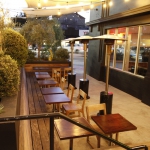 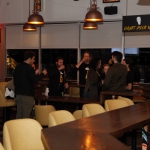 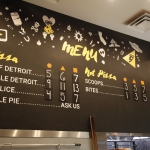 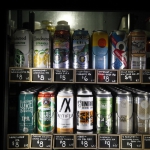 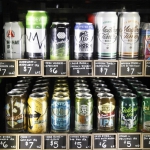 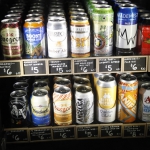 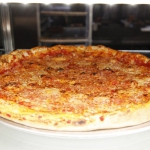 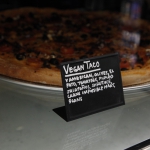 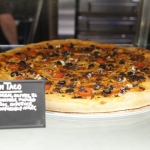 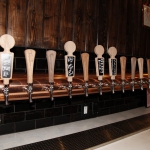 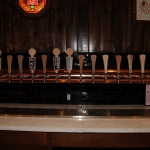 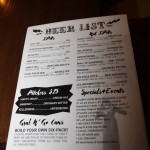 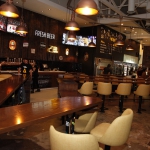 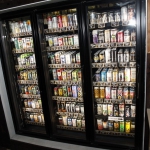 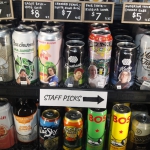 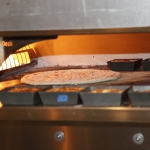 One Response to Photos from the Media Preview of California Sun