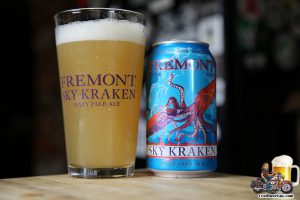 Fremont Brewing of Seattle, Washington will release a new year-round beer called Sky Kraken Hazy Pale Ale on Thursday, January 24th at Fremont’s Urban Beer Garden starting at 4:00 PM. It will be available in 12oz cans, kegs, and 22oz bottles across Fremont’s entire distribution footprint. Sky Kraken is Fremont’s newest year-round release since Lush in 2017 which started as a seasonal in 2016.

A naturally unfiltered beer, Sky Kraken is made with Strata, Mosaic and a touch of Citra hops and 2-Row Pale malt, malted oats, white wheat and flaked wheat. Sky Kraken swims through the sky with ripe melon, juicy citrus, pineapple, and pepper flavors.

“We released the Kraken because Krakens can only be kept a secret for so long,” explained Matt Lincecum, Fremont Brewing CEO. “Nicknamed ‘Sky’, this Kraken likes watercolors, chocolate cookies, tuna snacks and dislikes being alone. So, if you see the Kraken, please take it home and share it with friends.”

Fremont Brewing is a family-owned craft brewery founded in 2009 to brew artisan beers made with the best local ingredients we can find. Our beer is distributed in kegs, cans, and 22 oz. bottles and can be enjoyed every day at our kid- and dog-friendly Urban Beer Garden in Seattle’s Fremont neighborhood. Because Beer Matters! Cheers!