I also mentioned that everyone attending Laughs By Volume will receive a gift bag with products, discounts and special offers from all the participating sponsors; this too has been expanded and is now valued at over $300!

Laughs By Volume will be held over the course of three sessions on Saturday, January 30. The three-hour sessions will run from 1:00-4:00 PM, 5:00-8:00 PM and 9:00 until midnight. There will be assigned seating as well as Standing Room Only tickets; this means that each session will be limited to no more than 200 people. Tickets purchased online start at $27.50 for Standing Room Only (SRO) tickets and are $32.50 and $35.00 for assigned seats. As usual, I have a Promo Code for you, but it is only good for the assigned seating; however, you save 15% so it makes it a great deal. 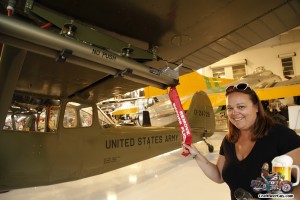 One advantage of purchasing a seat is that not only can you see the comedy show better, which includes Evan Wecksell, Sammy Obeid, Jason Love, Atsuko Okatsuka, Jonesy and Stevie Mack, but you will get a food voucher for either a free hot dog or cheese nachos. Unfortunately, the food vouchers are not available to those purchasing SRO tickets, but there will be a concession stand which [at the time of writing this] will have chili and cold sandwiches.

You can buy your tickets online at Eventbrite and get more details and updates by following the Laughs By Volume Facebook event page.

For those Southern California craft beer fans that live a little too far from Hollywood, do not despair; Laughs By Volume will be held at several different venues over the coming months. The next one is planned for February 27 in Chino at Planes of Fame. If you happened to attend the Twilight Tasting at Lyon Air Museum you have a pretty good idea of what a cool venue that will be; of course, craft breweries from that area will be included. I hope to see you at one of these upcoming events. Cheers!