On Saturday afternoon King Harbor Brewing Company (KHBC), Redondo Beach’s only production brewery, held their one year anniversary party at their tasting room. King harbor used the celebration to raise funds for the Richstone Family Center in Hawthorne. And when I say celebrate let there be no mistake, King Harbor pulled all the stops with this event.

While the tasting room remained open for the general public to join the party for free, the parking lot was transformed into party central for those that wanted to attend the fundraising portion of the event. Included in the price of admission was access to many cask and one offs brews including their Single-Barrel Anniversary Ale and a Belgian style pale ale that King Harbor did in collaboration with Telegraph Brewing Company. Live music was provided by local musicians Nick Shattuck, Dankrupt and The Thirsty Crows. There was also a dunk tank that featured local celebrities and a couple craft beer celebs such as Beer Paper L.A.’s Daniel Drennon and yours truly. Everyone that came to the parking lot portion also received a nice commemorative mug and a bottle of their Sh!ft 1 Anniversary Ale, an Imperial Brown Ale aged in Corsair Whiskey Barrels with graham crackers and cacao nibs. Food was available for purchase from Fill R Up Gastro Garage and Los Angeles Fry Company.

There were several beerlebrity sightings including Patrick Rue of The Bruery, Brendan Lake of Phantom Carriage and Herbie Homebrew with Frances Michelle representing the LA Brewers Guild. I also spotted and spoke with one of the people that was on the Redondo Beach Planning Commission when King Harbor applied for and was granted their Conditional Use Permit.

There is no question that this was a very fun event for everyone that attended and it raised a significant amount of money for the Richstone Family Center. Tom Dunbabin, Will Daines, Phil McDaniel and the entire team at King Harbor Brewing Company is to be congratulated and I cannot wait to see what the next year brings us. Cheers! 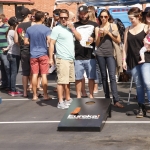 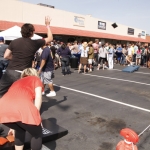 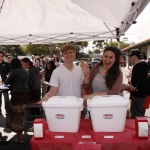 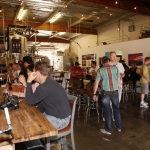 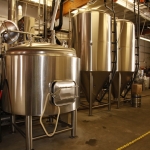 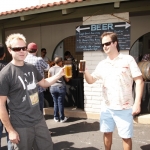 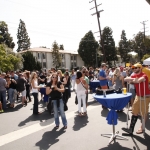 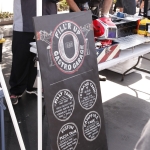 1 2 ... 19 ►
Back to Photos of the King Harbor Brewing Company 1 Year Anniversary Party