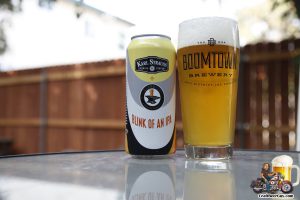 Karl Strauss Brewing Company has a brand new beer in its collaboration series! Introducing Blink of an IPA, an experimental India Pale Ale brewed with AleSmith Brewing Company. This limited release is fermented with Norwegian kveik yeast and will debut on October 10th in cans and on draft throughout California.

Long-time friends and first-time collaborators, Karl Strauss and AleSmith are both known for experimenting with their small batch releases. Neither brewery had previously brewed with kveik yeast, which meant that Ryan Crisp (AleSmith’s Director of Brewery Operations & Head Brewer) and Matt Johnson (Brewmaster of Brewery Operations at Karl Strauss) were eager to jump in and experiment.

“Both Ryan and I wanted to brew a Kveik IPA. Hops are usually the star in an India Pale Ale, so it was a lot of fun to primarily focus on the yeast for this particular IPA. Kveik is really such a unique strain. We were amazed how well it fermented at higher temperatures– from 78°F to 98°F!” – Matt Johnson, Karl Strauss Brewmaster of Brewery Operations.

Not only does kveik ferment incredibly quickly – within days, instead of weeks like typical ale yeast – but it is known for producing bright, citrusy esters. This makes is a natural fit for an India Pale Ale.

Blink of an IPA weighs in at 6.5% ABV with aromas of stone fruit and pineapple. It is brewed with Simcoe, Citra, Ekuanot, El Dorado, and BRU-1 experimental hops. The beer is light in body, intense with orange and fresh fruit flavors, and finishes with a pleasant, lingering bitterness.

Blink of an IPA will be one of Karl Strauss’ featured collaborations at Collabapalooza, their celebration of independent beer coming up on Saturday, October 19th. But fans of Karl and AleSmith can snag this collaboration even earlier, beginning on Thursday, October 10th. This limited release IPA will be available on draft and in 16oz can 4-packs at Karl Strauss’ Brewpubs, Tasting Room, and at craft accounts throughout California. Cheers!