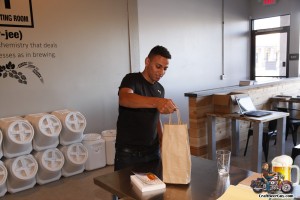 At the end of June I received an email telling me about a relatively new startup called DoorDash. DoorDash is a service that started as an on-demand food delivery service ala Pink Dot or UberEATS; and the reason they were contacting me is that they were getting ready to include alcohol delivery in Los Angeles, Orange and San Diego counties and they wanted all of you to know that you can have cold, fresh, craft beer delivered to you. What was ironic (to me, anyway) was that not more than an hour earlier one of my friends was on Facebook asking someone to deliver him a beer at work; DoorDash will do just that!

Since I was being offered free beer and cash to use the service, it was a no-brainer and I started exploring the DoorDash website. Since DoorDash offers merchants based on where you live, I was a little disappointed when the only craft beer delivery in my area was from King Harbor Brewing Company (KHBC). I have nothing against KHBC, but I can walk there and have a beer in the time it took me to review the DoorDash website; I pointed this out to my contact and was informed that they would attempt to expand my service area [for the purposes of this article] to include more beer delivery options.

Try as they may, it seemed like expanding my delivery area was not going to be an option, so I agreed to have them deliver KHBC beer the 1.5 blocks to my house. I placed my order, which seemed easy enough, then went out taking care of business knowing that KHBC did not open until 4:00 PM and the delivery was scheduled for 4:30. I figured if I was home by 4:00, all would be good.

As it turned out, I got hung up and pulled into my driveway right at 4:00 when I received an email from DoorDash stating that my order had been canceled! I was not very happy to learn that I rushed home for nothing, so I attempted to find out why. DoorDash said KHBC canceled their participation in the service; but as I had just spoken with COO and co-founder of KHBC, Tom Dunbabin that morning about how DoorDash worked with them and he had given no indication of terminating their relationship with DoorDash, I was not convinced. To be honest, I am not sure we will ever know what really happened; I have my own suspicions.

My DoorDash connection was persistent that we were going to make this happen one way or the other; he continued to work on getting my delivery area expanded and in the meantime I got an alert than KHBC was once again an option for beer delivery. As it turned out, I was going to Zymurgy Brew Works & Tasting Room Wednesday evening to do a brew, so we decided that I would try again, this time having the KHBC beer delivered to me at Zymurgy Brew Works in Torrance.

My delivery was scheduled for between 4:45-5:15 so I was not entirely surprised when I got an email a little after 4:00 from DoorDash, but the message with the subject of “Adjustment to your order from King Harbor Brewing Co” followed by the message, “I’ve removed the items from your order as per your request. I have also refunded $0.00 to your credit card, which includes the cost of the item and tax. Your Order History under the Account Settings tab will also reflect the new charges.”

I was astounded and started firing off emails to anyone I thought mattered; I could not believe that I was out doing a brew and there was not going to be any beer to consume while doing so. I mean, who does that? I have pretty limited brewing experience but it is my understanding that it takes beer to make beer and it did not appear I was going to have any. 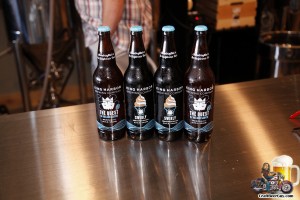 A few minutes later I got an email saying my beer was on the way, so I was pretty confused but happy when a young man came in carrying two brown paper bags that I immediately recognized as being the type found at breweries for to-go bottles.

I confirmed my suspicions that the brown paper bags contained beer from KHBC and told the driver about the message I had received about items being removed from my order. He was as taken aback as I but had no explanation. After he left, I think I figured it out.

When ordering beer on DoorDash, one must be aware that they do not seem to update their menu regularly, if at all. I had ordered two bottles of the King Harbor IPA and two of the Swirly. When you place your order there is a drop down menu that instructs them what to do “if” the beer you requested is not available. Going by memory, the options were to let the brewery staff decide, cancel the order, or have them contact you for further instructions. I don’t know if it was because I was sure the IPA would be available, or I wasn’t thinking, but I opted to let the staff choose if the IPA was out of stock. I could not find an easy way to modify it afterward, but when I ordered Swirly I told them to contact me if it was not available.

As it turned out, IPA was not available; I suspect the alert I got was a weird way of telling me they were substituting my IPA for a Quest on Nelson, which was totally fine with me. Heck, if they had updated their menu, I probably would have opted for it.

So, this article is already twice as long as DoorDash requested, so what are my thoughts and what do you get for reading all the way through?

In the month and a half between the time I was contacted to write this article and now, I had time to play with the service. I would set up addresses in neighborhoods that I knew existed and just see what kind of options were available. Part of what I wanted to do was figure out the radius from the delivery address. I am guessing it is about 10 or 15 miles. Depending on where you live, you may or may not have a lot of options. Some of the participating breweries, besides King Harbor Brewing Company, include Golden Road Brewing, Four Sons, Backstreet, Newport Beach Brewing, Mike Hess, and Hillcrest Brewing Company.

I will say that I would not have been against writing an article for one of my other sites discussing the food delivery portion of DoorDash. My experience was probably different than you will experience because I was being limited on my choices. I do think it would be very cool to go to a party and just have the beer delivered to you; especially if you are walking or riding a bike. Yes, it costs more than going to the brewery yourself which make me using KHBC as an example pretty ridiculous, but not everyone has a brewery a block from their house.

Personally, after speaking with Tom Dunbabin at King Harbor, I think every brewery around here should consider partnering up with DoorDash. From what I can tell, you probably won’t get that company jet you have been dreaming of, but every little bit helps. I mentioned Pink Dot earlier; I used to practically live off that service; if they offered craft beer delivery …

So, since you read this to the end I am going to offer you a one-time discount if you spend more than $20.00 with DoorDash. Use promo code: BEERGUY to save $7.00 on orders of $20.00 or more. Also, there is a $1.99 delivery fee that is automatically waived with your first order. Tips are factored in, but they are adjustable.

I think DoorDash has a lot of potential; they just need to reach out to more of the local breweries. I mean, there are 17 within a 15 mile radius of me and I can only choose from the closest of the bunch?

Give them a shot; I would be interested in hearing about your experience. Cheers!

Post script: After my order was completed I got an email asking me to rate the experience from 1-5. I gave it a 3 because this was my second time trying and the poor communication of the email telling me they were substituting Quest for IPA. This was immediately followed by an auto-responder that wanted to know why I only gave them a 3. I did not bother responding.

This evening, after I finished writing the above article but before proofreading and publishing it, I received a telephone call from DoorDash Customer Care as a follow up to find out why my experience had only been rated as fair. Now, you should know, this guy did not know that I was reviewing their service; only their PR company knew who I was, so I am convinced that their concern was genuine. It is good to see a company that stands behind their service and it only serves to up my suggestion that other craft breweries might want to check out DoorDash.