These photos were taken over the course of two days, September 16 and 17, days two and three of my Craft Beer Tour 2021, or the quest for the best fresh, wet hop IPA in the land; no judgement though. Anyway, as the title suggests this takes place in and around Klamath Falls, Oregon.

Blame it on old age or whatever you want, but for some reason I thought I had been to Klamath Falls back in 2018, but when I got into town nothing looked familiar and when I looked through the list of breweries I had visited in Oregon, I realized I was thinking of Grants Pass and I had never been here before. As I thought about it, I remembered I never traveled to Bend, the eventual destination, from the south. I was on the other side of the state.

As I mentioned in the first article, I am using AirBNB this time and as I only saw one brewery in the town I decided to check in with my hostess, Emily, before heading over that way. When I told her what I was doing as far as the craft beer tour was concerned she took an interest. She mentioned Klamath Basin Brewing, which I had already found on Google. She then suggested Mia & Pia’s Pizzeria; she hinted that I would pretty much have to be a local to know that their taps flowed with their own brewed beer, that was apparently brewed off premises on the owner’s farm; she also suggested I sit at the bar. She mentioned another small brewery in town, but they did not have a tasting room so I thanked her, and headed over to Mia & Pia’s Pizzeria to sit at the bar and see what was up with their beer.

Mia & Pia’s looked like your typical beer bar when I first walked in. There were obvious regulars at the bar that all turned to look at the guy that walked in with the big camera. I asked the beertender, Mary which taps were theirs, and if it would be okay to take some photos. After grabbing some shots I settled down to create a flight.

Typically they have 12 or 13 taps flowing, but on the day of my visit their were about eight options available, which was more than enough for the flight I was going to order. The flight consisted of their Emmett and Anna’s Pivo, Spencer Creek Amber Ale, Improvisor IPA, Rod’s Rodeo Red, Applegate Trail, and Otto Mulligan’s Irish Stout. All six were solid, with Rod’s Rodeo Red being my favorite, followed by Spencer Creek.

By the time I finished the flight, I was pretty much friends with all the regulars sitting at the bar. It was then then I was told to check out the back patio area where the pizzeria was. It was a very spacious area and it was there that I ran into some more regulars that eventually introduced me to the co-owner/wife of the brewer. After a few minutes of conversation, she called her husband, Rod, of Rod’s Rodeo Red, to see if there would be time the next morning for me to drive out to the farm and check out the brewery operation; Rod agreed to meet me the next morning.

Mia & Pia’s Pizzeria is located at 3545 Summers Lane in Klamath Falls. They are open Wednesday through Sunday and offer growlers to go. It was a very fun location.

After leaving Mia & Pia’s I headed over to Klamath Basin Brewing Company, which looked exactly like a brewery from the outside, except for a couple the cow on the clock outside; I would have to ask what that was about.

Founded in 2001, Klamath Basin has spacious seating inside and out. They had 10 beers available on tap, so I set up a flight consisting of their Backyard Vanilla Porter, Pilsner, Citrus Dream IPA and Red on Red. Red on Red was an imperial red and definitely my favorite.

I didn’t get to interact much with others, but I had to know what the cow was all about. Klamath Basin Brewing used to be a creamery before it was a brewery, which I would later discover is a common denominator for all three Klamath Falls breweries.

Klamath Basin Brewing Company is located at 1320 Main Street in Klamath Falls. They are open Tuesday through Sunday and offer cans and growlers to go.

The next morning I texted Rod to confirm that he was not too busy farming to show me around; being given the green light I headed 15 or 20 minutes out of town to visit the farm. It was there that I learned something about the three Klamath Falls breweries, they all were dairy farms or creameries when they first opened.

Rod told me the story of how his parents had the dairy farm back in the 1950’s, but eventually they decided to quit that and open the pizzeria. About 26 years ago Rod attended a beer festival in Eugene or Salem (sorry, I don’t recall). At the festival he attended a seminar about homebrewing; in the course of discussion it was mentioned that stainless steel was the best for brewing, fermenting, storing, et cetera. Rod knew he had plenty of stainless steel equipment from the dairy so he asked his dad if he was interested in brewing. Dad had too many irons in the fire, but told Rod to go for it, if so inclined. The rest is history. A good portion of his brewing equipment is dairy equipment that he modified. The mash tun used to separate cream from ram milk, the pumps that used to milk cows now have beer running through them. There was lots of history Rod is quite proud of, as he should be, I just don’t have time to write it all.

If you read this far, you hopefully recall that I there were three breweries in Klamath Falls; one did not have a tasting room. That would be Skyline Brewing Company. My friend Phil had mentioned them, and a few other people had mentioned the name, but as they do not have a tasting room I figured there was no way I would experience their beer, until Rod asked me if I would like to meet Ty, the co-owner of Skyline Brewing. Of course my answer was yes, if it was convenient with Ty. Rod called Ty, Ty talked to me, and 20 minutes later I was pulling up to the farm/ranch location that is Skyline Brewing.

Skyline Brewing was formerly a dairy farm, but when the market changed, they started raising show cattle and brewing beer. As you can see from the photos, their “brewhouse” is rather rustic; it almost reminded me of my visit to Big Texan Brewery, but Skyline has a real cold box.

After sampling a few brews, Ty took me out to meet some of his herd. While I couldn’t pet them, some of them seemed to enjoy being photographed, while others, not so much.

Skyline Brewing Company does not sell beer to the public, but you can find them at fine dining/drinking establishments in southern Oregon.

Klamath Falls was a great visit, but now it is time to move along to Bend. Thank you to Rod, Ty, Ry, Emily, and all the regulars at Mia & Pia’s for a memorable couple of days. Cheers.

Back to Photos of Klamath Falls Breweries
[Show as slideshow] 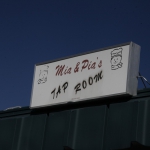 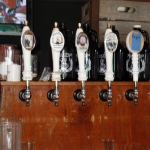 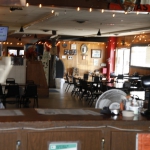 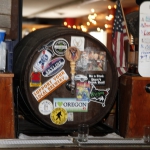 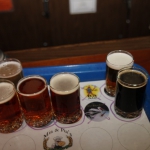 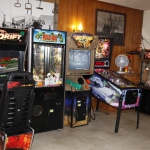 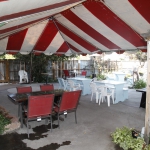 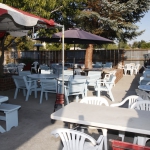 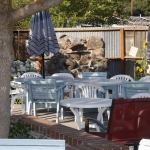 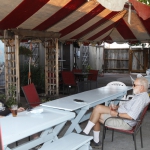 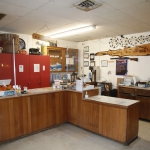 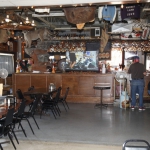 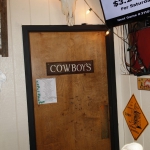 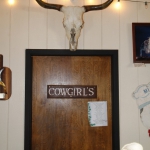 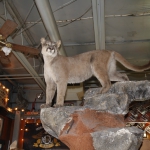 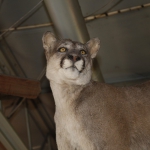 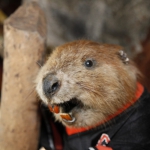 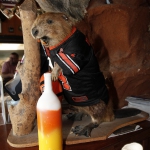 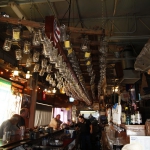 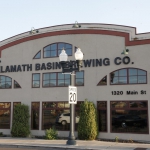