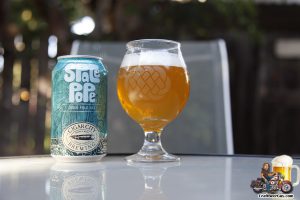 Cigar City Brewing (CCB), one of the fastest-growing craft breweries in the U.S., has announced the addition of the CCB Mixed 12-Pack to its year-round offerings. The new format includes 12oz cans of CCB’s most successful brands – Jai Alai IPA, Guayabera Citra Pale Ale, and Florida Cracker Belgian-style White Ale – plus Space Pope IPA, a vibrant and citrus-forward IPA brewed with Galaxy and Nelson Sauvin hops, packaged exclusively for the Mixed 12-Pack.

The introduction of the CCB Mixed 12-pack follows the successful launch of Jai Alai IPA 12-packs and the CANarchy Mixed 12-Pack Vol. 1, which features Jai Alai IPA and flagship brands from CANarchy portfolio-mates Oskar Blues Brewery, Perrin Brewing and Squatters Craft Beers. CCB looks to expand its presence in the 12-pack can segment as 12-packs of craft beer continue to grow in U.S. grocery*.

Exclusive to the new CCB Mixed 12-Pack is Space Pope IPA, a bright, citrusy IPA of 7.3% ABV that’s loaded with Mosaic, Citra, Hallertauer Blanc and (what else?) Galaxy hops to highlight notes of candied orange and tangerine. After limited draft and package runs in select markets, Space Pope is making its year-round debut in the CCB Mixed 12-Pack. Kegs of Space Pope will see sporadic distribution throughout 2019, but 12oz cans of the intergalactic IPA will only be available in the CCB Mixed 12-Pack and in Cigar City Brewing’s Tampa Tasting Room.

Each CCB beer is “hecho a mano,” or “made by hand” to ensure quality, freshness and flavor at each step of the beer-making process. CCB Mixed 12-Pack is packed by hand with fresh beer before going out to wholesalers, following a production process where brewers manually produce beer, oversee fermentation and dry hop beer without the aid of brewery automation.

“We’re anticipating a huge response to CCB Mixed 12-Pack,” said Neil Callaghan, Cigar City Brewing’s El Lector. “Variety 12-packs resonate with consumers who want to explore different beer styles or keep their fridges stocked with options for all kinds of occasions. The success of variety packs from our brothers and sisters at Oskar Blues Brewery and Perrin Brewing got us really excited to tackle this project. This is a perfect vehicle to showcase Space Pope IPA, one of my favorite new CCB brands, so I think CCB Mixed 12-Pack will be a permanent fixture in my cold box at home!”

Select markets around the US will receive deliveries of CCB Mixed 12-Pack beginning in January, with footprint-wide distribution coming by mid-2019. CCB Mixed 12-Pack will be available in the nation’s finest grocery stores, package stores, liquor stores and independent craft beer shops.

Visit Cigar City Brewing’s website [www.cigarcitybrewing.com] for more information on CCB Mixed 12-Pack and the rest of their dynamic line-up of craft ales and lagers.

About Cigar City Brewing:
Cigar City Brewing, makers of Jai Alai IPA and Hunahpu’s Imperial Stout, was founded in 2009 by Joey Redner with the goal of creating world-class beer that reflected the flavors and history of the Tampa Bay region. This unique approach has resonated with local and national markets and the brewery has quickly grown to produce over 140,000 barrels of beer annually. Cigar City Brewing is a key partner in CANarchy, a craft brewing collective that represents the largest canned craft beer supplier in the country.