Abigaile to host first ever Novem-BEER-Fest 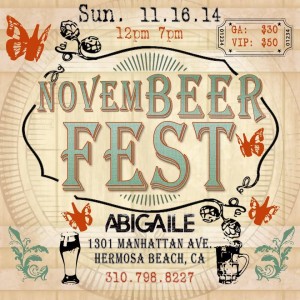 22 Craft Breweries under one roof

As the craft beer festival season draws to a close, Abigaile Restaurant and The Brewery at Abigaile will host their inaugural Novem-BEER-Fest Beer Garden on Sunday, November 16 from noon until 7:00 PM. The event will feature 22 craft breweries from Lancaster to Lakewood and Covina to the Pacific; just about every production brewery (and a couple brewpubs) in this massive geographic area will be included. To give you an idea of what a great list of local breweries are attending, there are three breweries I have yet to visit and one (Alosta) whose beer I have never even tasted yet.

The breweries in attendance include Absolution Brewing, Alosta Brewing, Angel City, Beachwood, Bravery Brewing, Eagle Rock Brewing, El Segundo Brewing, Golden Road, Kinetic Brewing, King Harbor Brewing, Ladyface, Monkish Brewing, MacLeod Ale, Ohana Brewing, Progress Brewing, Smog City, Strand Brewing, Timeless Pints, The Dudes, Three Weavers, Wolf Creek and, of course, The Brewery at Abigaile. Several of these breweries are very new, like Three Weavers that just opened their tasting room this past weekend. To visit each of these breweries tasting rooms would take a month of weekends and Abigaile has brought them all together under one roof.

Advanced tickets can be purchased through Eventbrite at https://www.eventbrite.com/e/novem-beer-fest-tickets-13915316085. I hope to see you there. Cheers!