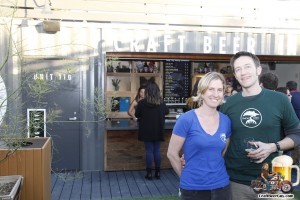 As I mentioned three weeks ago, Smog City Brewing’s satellite tasting room at SteelCraft has begun their soft open providing the ability for Long Beach area residents, and those further south, the ability to sample most Smog City beers that are served on tap. Unfortunately Smog City was not allowed to sell growlers or bottles to-go under their permit with the City of Long Beach; that changed last night when Smog City appeared before the City of Long Beach Planning Commission; the Planning Commission approved Smog City’s Conditional Use Permit Application 1611-19.

Laurie Porter, co-owner/founder of Smog City Brewing informed me that the decision was unanimous and they will begin offering growlers and bottles to-go beginning January 31, 2017.

I was unable to attend last night, but I did submit a written letter to the Planning Commission in support of the application. I have decided to post the letter I sent, not for any kind of “atta boy” but rather so others can use my letter as a template; trust me; I have used all my previos letters of support as a template for the next one I write. Feel free to use this to support your local craft brewery.

My name is Lloyd Brown; I am a Torrance homeowner for 30 years and South Bay resident for over 50. I am the writer for CraftBeerGuy.com and a co-founder of the Business & Beer networking group. In a nutshell, I am an advocate for local craft breweries. While I am not currently a Long Beach resident, I have been in the past and my work with CraftBeerGuy.com means that I spend quite a bit of time visiting the numerous breweries and craft beer and cider establishments in Long Beach.

I am writing in support of granting Smog City Brewing Company’s Conditional Use Permit Application 1611-19.

As a supporter of the craft beer movement that has emerged in Los Angeles County over the past several years, I decided it was important for me to attend CUP hearings for craft breweries and coincidentally, my first appearance before a planning commission was in Torrance, for Smog City Brewing back in September 2012 (http://www.gotbaddog.com/smog-city-brewing-cup-hearing/).

At that time I made a couple predictions about what craft beer would mean to Torrance; I think it is safe to say that I nailed it. In fact, our past and current mayors, Scotto and Furey, have both mentioned craft beer in their State of the City addresses and how it has become the newest growth industry in Torrance. There have been numerous articles going around the mainstream press discussing the millions of dollars and hundreds of jobs craft beer has brought to Torrance. With all the recent and planned activity in Long Beach, I suspect that it will not be long before your mayor takes similar notice of what craft beer is doing for Long Beach.

Torrance is now a craft beer destination and Smog City Brewing Company has become an integral part of the experience, in more ways than one. Not only has Smog City Brewing brought their unique style of beer to Torrance, they are also quite generous; frequently donating their beers and time to numerous non-profits, so much so that they received the 2013 Torrance Advantage- Special Recognition award from the City of Torrance. The point is that Smog City Brewing has been a great addition to the city beyond the revenue they bring in.

In preparation for my first appearance before a planning commission, I asked what the concerns were; from my experiences attending subsequent commission meetings, I was able to tailor my comments to concerns that I had heard brought up in the past. Since this is my first time speaking about a satellite tasting room, I asked what the purpose of this hearing was and was told that the Smog City – SteelCraft location would be considered a “liquor store” if they have carryout beer available. Having visited well over 100 craft breweries and even a handful of satellite locations, “liquor store” would have never come into my head if I was trying to describe the concept to someone.

Craft beer drinkers go to craft breweries to enjoy the freshness of the beers and an opportunity to talk to the brewers and learn more about the art. The SteelCraft location will shave 30 miles off a roundtrip drive for fans of Smog City that live in Long Beach and locations south; and believe me; they have plenty of fans that are already making the drive to this new location.

I had the pleasure of attending their “Friends and Family” soft open; an event that was not publicized and was primarily meant for the friends and family of the people behind the SteelCraft project. I could not help but notice how crowded it started to get and I soon recognized Long Beach locals that had heard from a friend that happened to drive by and saw people inside. The news had spread like wildfire.

I used the opportunity to talk to people I did not know and discovered a few that were very excited that now they did not have to pay for an Uber to go to Torrance; they could now walk to Smog City – SteelCraft.

Smog City – SteelCraft will be a popular destination; of that I have no doubt. However, if they are not allowed to fill growlers or sell bottles to-go there is money being left on the table by Smog City, which translates to less revenue for Long Beach.

I noticed that I did not spend any time comparing Smog City – SteelCraft to a liquor store; that is because there is no comparison, unless you know of one that only sells one brand of beer (that they brewed) and some t-shirts.

As a homeowner, voter, tax payer and craft beer fan I encourage this Commission to grant Smog City Brewing Company the Conditional Use Permit as applied for.

Thank you for your time and consideration.