These photos were taken Wednesday evening at Jimmy’s Bar & Grill monthly beer dinner. This month’s dinner was a little different than the others Jimmy’s puts on in that instead of featuring one brewery, it featured five breweries from Belgium. When it comes to beers from Belgium, probably one of the most knowledgeable local guys is Select Beer Store owner, Wes Jacobs. Anyone that has visited the Select Beer bottle shop has inevitably noticed the vast variety of Belgian ales they have available there. When Jimmy’s co-owner/chef, Marc Dix, decided he wanted to do a beer dinner featuring Belgian brews, because Belgians are meant to be served with food, it was not a difficult decision to approach Jacobs and ask if he wanted to curate the beer served.

Jacobs readily agreed and told Dix to provide the menu and he would come up with the beers; but that is not how Dix works, he tailors the food to compliment the beer. You will not find the dishes served at the beer dinners on the daily menu. That meant that the first thing that had to be done was to figure out what five beers would be served at the dinner. As you might imagine, that was quite a task in of itself. As I recall, it took about two months of sampling, with up to eight people assisting in the decision making process. Once the beers were chosen, Dix was able to do his thing; and did he ever.

I think I have mentioned food frequently enough on this site that regulars know that when Tanya and I go out to eat I have little say in the matter. That is because I really don’t care; when it comes to food I am a simple man. Heck, I had fried Spam for breakfast this morning. Many times when I am looking over an upcoming menu, I have to Google what the item is because I do not recognize it. Other times I look for the keywords, like mac and cheese, shrimp or duck to get an idea of what will be served. The thing I know about Jimmy’s beer dinner menu is that even if I have never had a particular dish, Dix and staff are going to wow the crowd with it.

Last night was also different because I was going to try five beers I was unfamiliar with. There was no apprehension though, as I know Jacobs knows his beer and Dix knows how to make sure everyone had a great time.

Our welcome beer was Saxo by Brasserie Caracole. Saxo is a very smooth blonde that went down very easily for a 7.5 % brew. So we did not all end up under the table by the end of the second course, our first course was mac and Swiss cheese with rainbow kale. It was served with Blanche de Bruxelles by Brasserie Lefebvre; a Witbier that comes in at a mellow 4.5%. The Swiss cheese was so gooey and it really paired nicely with the Blanche de Bruxelles. To give you an idea of how much effort is put into making these dinners the masterpieces they are the mac and cheese initially was going to have red chard, but when Dix went shopping at the farmers market it was unavailable so he substituted the kale instead. It was a great choice.

I scored on the second course because Tanya cannot eat shellfish and sauteed shrimp on grilled garlic toast was served. I love shrimp and these ones were so plump and juicy I gladly finished hers off. It was paired with Gouden Carolus Tripel by Brouwerij Het Anker.

The main course was a maple mustard glazed duck on agrodolce red cabbage. For me, duck is usually too fatty and I do not enjoy it that much. The duck that we had last night was different than any I had before; if you made me guess what I was eating, duck never would have been on my radar. It was paired with Gulden Draak by Brouwerij Van Steenberge, a Belgian strong dark.

For dessert we were treated to Hasselback Style roasted apple caramel cobbler which was paired with Oude Lambiek by Brouwerij Oud Beersel. It was a great pairing because the beer gave tartness to the apples and I was getting some saltiness from something that really complimented the caramel.

As you can tell, it was quite the meal and there were some outstanding brews provided that were mostly unknown to most of us. Good food, good beer, good people and you can learn something in the process. How can you beat that?

Thanks to Marc Dix and his entire staff for putting on another amazing meal; and thanks to Wes Jacobs for his input, which helped make this a successful event. 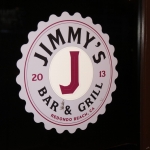 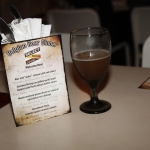 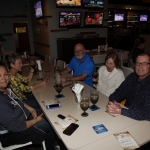 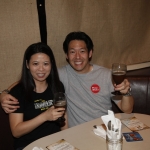 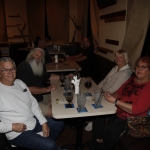 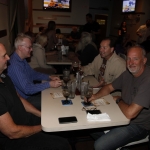 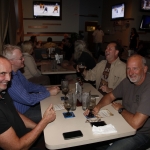 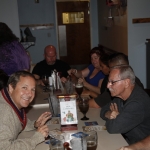 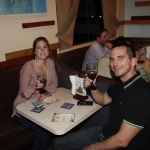 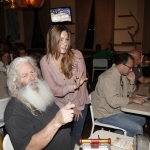 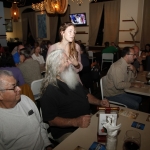 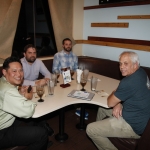 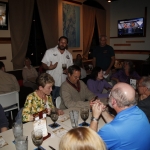 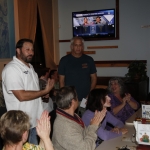 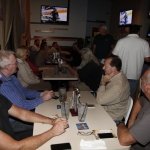 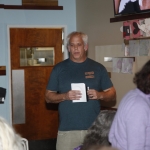 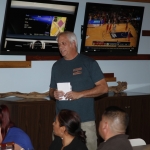 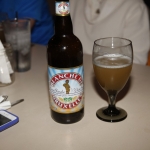 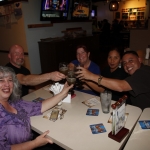 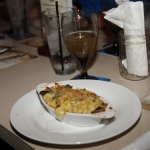