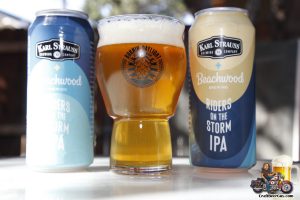 It’s no secret that brewery collaborations can often be more strategic than organic in conception, but Karl Strauss Brewmaster Paul Segura and Beachwood Brewing’s Julian Shrago have been thick as thieves for as long as can be remembered; and have been pushing for the chance to put their heads together on a large scale release. Well, Karl Strauss gave in, and they don’t regret it. “Riders on the Storm” IPA is available on draft and in 16oz 4-Packs at all Karl Strauss Brewpub locations, and at select retailers and craft beer bars throughout California and Arizona.

As described by Karl Strauss Brewing:

Brewmasters Paul Segura and Julian Shrago aren’t just fair-weather friends. They came together when we — nay, the WORLD — needed them most. Yes, they’re here to lead us to clearer skies with this mouthwatering beer. Riders on the Storm is a West Coast IPA overflowing with tropical, floral, and citrus aromas from Amarillo and Mosaic hops. Brewed with white wheat for a smooth mouthfeel and honey malt for a touch of sweetness, this bright and zippy beer has everything you need to weather the storm.