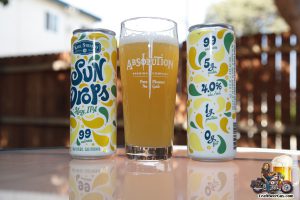 Launching March 4, Sun Drops Hazy IPA is a better-for-you beer clocking in at just 4.0% ABV and 99 calories, yet with all the character and complexity that you expect in a Hazy IPA. Brewed with Columbus, Idaho 7, and Amarillo hops for juicy citrus aromas, plus rolled oats for a silky mouthfeel, this beer refuses to compromise. Sun Drops Hazy IPA will be available on draft and in 6-packs of 12oz sleek cans at all Karl Strauss brewpub locations, as well as at select retailers throughout California.

Sun Drops Hazy IPA is the first release in the Karl Strauss “Small but Mighty” series, a collection of low-calorie beers that refuse to compromise on flavor. This 99-calorie brew is teeming with juicy tropical fruit aromas, big notes of spritzy citrus, and hints of sticky pine. Plus, it has the soft and pillowy mouthfeel that you crave in a hazy. Sheesh, pretty big claim for such a little beer, eh? Small but mighty, indeed.