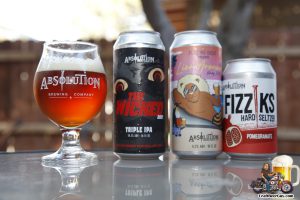 It is that time of year again, when triple IPAs come out of hibernation and are sighted all across California. Absolution Brewing is celebrating the season with a triple can release, including the annual release their triple IPA, The Wicked.

The Wicked 2021 offers in your face dankness matched with absurd drinkability; it is what you have learned to expect of The Wicked and you got it. Brewed with Nelson Sauvin, Mosaic, Simcoe and Idaho 7 hops, the results are a golden, dry IPA with juicy after tones. The Wicked 2021 (10.5% ABV) is available in 4-pack cans ($20) and on draft.

For the second release, Absolution’s Floc’ing Great series presents Lion Around Hazy IPA. Lion Around is a super hazy IPA loaded with Mosaic, Citra, and Zamba hops making this juice bomb burst with tropical fruit notes! Lion Around (6.3% ABV) is available in 4-pack cans ($16) and on draft.

You can order online now at https://www.absolutionbrewingcompany.com/shop for same-day local delivery or next day shipping, statewide. Cheers!