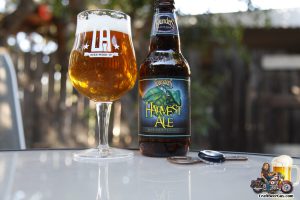 Harvest Ale is available nationally in bottles through October 2018.

It is definitely a great time of year for a hophead such as me. Having just left the Yakima Valley during their hop harvest, coming home to Founders’ Harvest Ale was great timing.

According to a recent report from Hop Growers of America, your next craft beer is more likely than ever to contain Michigan hops. Founders Brewing Co. is celebrating the rise of local hops with this year’s release of Harvest Ale, a wet-hopped ale. An annual mainstay since the early-2000s, Harvest Ale is the brewery’s ode to the beauty of American hops grown in their backyard.

Founders proudly uses 100% locally-grown wet hops in this year’s batch of Harvest Ale; which speaks to the growth of quality in the local hop farming industry. Harvested as small flowers from trailing vines, hops add complex aromas and flavors to beer, and have distinct personalities that vary greatly from farm-to-farm. Founders sources from a number of local Michigan hop farms, including MI Local, Hop Head Farms, and Pure Mitten. To guarantee freshness, the brewing team works around the clock to transform the fresh hop cones into Harvest Ale. According to Brewmaster, Jeremy Kosmicki, “it is an arduous, tiring process,” but there are few beers he enjoys brewing more. Harvest Ale marks the return of fall, and the hands-on production process transforms the brewery into an aromatic, greenhouse-like space that is unique to this season.

Harvest Ale is available nationally in bottles through October 2018. Founders will also celebrate the return of the beer at their annual Harvest Party, a tribute to the American hop. Hosted at their Grand Rapids taproom on October 13, Harvest Party will feature live music, special food offerings and an impressive tap list. Harvest Ale is available in 4-packs of 12oz bottles and on draft across the brewery’s distribution footprint. It has a suggested retail price of $12.99/4-pack.