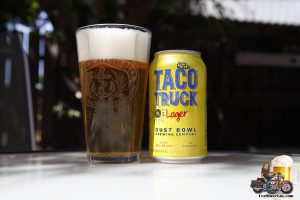 Happiness is having the UPS guy at the front door with another package from Dust Bowl Brewing Company; yesterday the package included Dust Bowl’s first introduction of Taco Truck Lager in 12 oz. cans. Taco Truck Lager was first introduced in 2016 in 12 oz. bottles/six-packs and draft. Targeting the easy-drinking, “backyard beer” fan, Taco Truck Lager quickly pulled into the top-selling spot for the Northern California craft brewery. As someone that is not particularly a fan of lagers, this one was quite tasty; I could easily drink more than one, and that is saying something when it comes to lagers.

Available year-round, the Mexican-style beer has resonated with loyal lager fans as well as beer drinkers who are new to craft. It’s approachable and sessionable at 4.7% ABV. The brewery’s data provides every indication that the cans will be well received. Wholesalers and consumers alike want more cans and the summer launch falls in line with outdoor activities – the number one draw for can consumption.

“Taco Truck Lager is a great all-occasion beer,” shares Don Oliver, Brewmaster. “With the summer upon us, it made sense to offer Taco Truck Lager in cans. Whether you’re heading to the beach, mountains or simply poolside in your own backyard, cans provide the ultimate in convenience for the beer fan. Active, outdoor lifestyles demand it.”

The cans are printed in the distinctive, bright yellow and blue color scheme, and made available to wholesalers in early June.

Dust Bowl Brewing Co. beers may be found throughout Central and Northern California, including the San Francisco Bay Area, the Central Coast to San Luis Obispo County and in the state of Nevada. The company is looking to expand to Southern California and out of state. Consumers may utilize the Beer Finder at www.dustbowlbrewing.com to find their closest retailer.

Dust Bowl Brewing Company produced its first beer in May 2009. The company built and moved its production to a 30,000 sq. ft. brewery and taproom, located in Turlock, California, in June 2016; when I visited them in 2014, Dust Bowl was brewing offsite. Dust Bowl Brewing Company beers are available in 5 and 15.5 gallon kegs along with selected styles in 22 oz., and/or 12 oz. bottles and cans. Distribution includes Central and Northern California, California Central Coast and Nevada. Cheers!