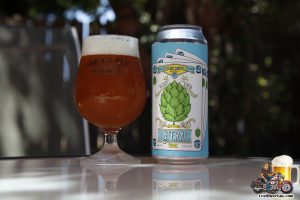 I was first introduced to Dust Bowl Brewing Company on a road trip I took back in 2014. While I have not made it back to Turlock in a while, I do keep in contact. Yesterday, May 31, Dust Bowl Brewing announced the release of Lateral 3, the third in a series of hazy IPAs from the Northern California craft brewery. Packaged in pint cans, the Lateral Series offers beer fans a different take on the popular hazy IPA style with each release.

“For the third addition to the Lateral Series we wanted to move toward more citrus/orange character and away from the tropical that shows in Lateral 1 and 2,” shares Don Oliver, Brewmaster. “We switched up the yeast and hopping and opted to head into a double IPA territory at 8.5% ABV.”

Lateral 3 falls into their specialty can release category for Dust Bowl Brewing and is mostly pre-sold to wholesalers. The latest in the series is expected to hit retailers the last week in May, just in time for summer. At 8.5% ABV, Lateral 3 boasts a higher than typical alcohol content for a hazy IPA. In keeping with Brewmaster Oliver’s notable style, the alcohol is well-hidden for a smooth finish.

The can label features signature styling from Philadelphia artist, Bryce Gladfelter. Hopcentric playing cards featuring the number in the series along with color blocking create eye-catching consistency for the consumer.

“We know it’s important to pay careful attention to the details,” comments Founder/Owner, Brett Tate. “We carry this philosophy from brewing practices and customer service all the way through branding. Beer fans are discerning. While we strive to produce the best beer possible, our marketing department pays equal attention to maintaining our brand image.”

Dust Bowl Brewing Co. beers may be found throughout Central and Northern California, including the San Francisco Bay Area, the Central Coast to San Luis Obispo County and in the state of Nevada. The company is looking to expand to Southern California and out of state. Consumers may utilize the Beer Finder at www.dustbowlbrewing.com to find their closest retailer. Cheers!