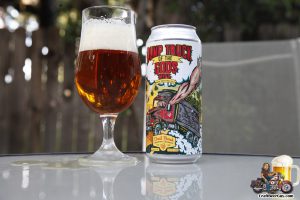 Dump Truck of the Gods released by Dust Bowl Brewing

Dust Bowl Brewing Co. continues to expand its specialty can portfolio with the introduction of Dump Truck of the Gods. The Mega IPA was first offered in draft in August 2014 and rolls out to retailers this month in the 16 oz./pint can format. It’s on the schedule for another run in May. Dump Truck of the Gods features a hefty 11.7% ABV and 130 IBUs. Huge aromas of candied orange, papaya and a little booziness accompany the full-bodied, caramel malt sweetness.

Brewmaster, Don Oliver, reflects on the first brew, “In the quest for ever hoppier beers, I was formulating two brews, one a standard IPA with the largest hop load we had tried, which also incorporated hop extracts, and a double IPA using hops named after gods – Apollo, Zeus and Merkur. That exercise lead me to combine the two ideas for a high-gravity Mega IPA, which quickly became a hit at our taprooms.”

The experimentation proved to create somewhat of a local cult following. Fans descend on Dust Bowl’s two Turlock, California taprooms every time Dump Truck of the Gods joins the draft rotation. What they don’t drink onsite leaves in growlers and crowlers.

“We’re excited to finally have the capacity and flexibility to add new package offerings to all of our wholesalers,” shares Brett Tate, founder/owner, Dust Bowl Brewing Co. “We really feel like we’re hitting our stride in operating the new brewery. Our distribution is growing, our portfolio is growing and we have a new taproom on the way in Monterey, California. Being able to execute our vision feels especially good in today’s competitive craft beer market.”

The vibrant label, designed by Blindtiger Design out of Seattle, WA, pays subtle respect to Oliver. It showcases the brewmaster’s tattoos on an arm breaking through the sky to take control of the runaway dump truck overflowing with mythical hops.

Dust Bowl Brewing Co. beers may be found throughout California, Nevada and Oklahoma. Consumers can locate their closest retailers at https://www.dustbowlbrewing.com/beers/beer-finder/.

Dust Bowl Brewing Co. produced its first beer in May 2009. The company is owned by Brett and Karen Tate and Brett and Camy Honoré, who became the Tate’s business partners in 2011. The company built and moved its production to a 30,000 sq. ft. brewery and taproom, located in Turlock, California, in June 2016. Dust Bowl Brewing Co. beers are available in 5 and 15.5 gallon kegs along with selected styles in 22 oz. and 12 oz. bottles and 16 oz. and 12 oz. cans. Distribution includes Central and Northern California, parts of Southern California, Nevada and Oklahoma. The craft brewery showcases a wide variety of its beers at its two Turlock, California taproom locations, the Brewery Taproom and the Downtown Taproom. A third taproom in Monterey, California is slated to open in 2019. More information may be found at www.dustbowlbrewing.com. Cheers!