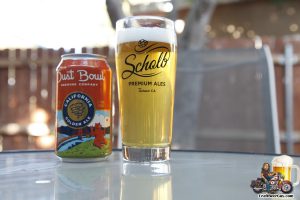 “Blonde ales and lighter lagers have been gaining in popularity and they are always good performers at our taprooms,” shares longtime Brewmaster, Don Oliver. “Our range of beers had a good amount of lagers and IPAs, so the golden ale was a good compliment and brings more balance to our portfolio. It’s a clean, easy-drinking beer with a light fruitiness and low bitterness.”

California Golden Ale was first released in draft only in December 2020. While consumer exposure was minimal due to the Pandemic on-premise restrictions, those consumers who picked up growlers or crowlers to go from Dust Bowl’s taprooms responded positively to the new release. California Golden Ale will reach the promising off-premise sector in late January. Available in 12oz. 6 pack cans, and 5.2 gallon and 15.5 gallon kegs, California Golden Ale is an ideal gateway beer at 4.5% ABV and 10 IBUs. It is sold through Dust Bowl’s network of wholesalers servicing California and Nevada, and at Dust Bowl Brewing Co. taprooms located in Turlock and Monterey, California.

The California Golden Ale label features a California brown bear, who the brewery fondly nicknamed “Barley.” The curious bear finds adventure from the Golden Gate Bridge to the famous drive-through Sequoia allowing consumers to envision themselves enjoying the California lifestyle. In true Dust Bowl fashion, the label has other subtle details such as the pickaxe icon from early mining days, the fun selfie stick that the company will capitalize on in marketing campaigns featuring Barley, and the use of “CA-Au,” the scientific periodic symbol for gold.

Dust Bowl Brewing Co. produced its first beer in May 2009. The company is owned by Brett and Karen Tate and Brett and Camy Honoré, who became the Tate’s business partners in 2010. The company built and moved its production to a 30,000 sq. ft. brewery and taproom, located in Turlock, California, in June 2016. Dust Bowl Brewing Co. beers are available in 5.2 and 15.5 gallon kegs along with selected styles in 22 oz. and 12 oz. bottles and 19.2 oz., 16 oz. and 12 oz. cans. Distribution includes Central and Northern California, parts of Southern California, Nevada, Oklahoma, Pennsylvania and Texas. The craft brewery showcases a wide variety of its beers at its two taprooms, the Brewery Taproom located in Turlock, California and the Tap Depot in Monterey, California. More information may be found at www.dustbowlbrewing.com.