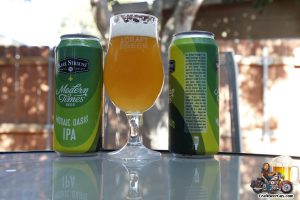 Karl Strauss Brewing Company is kicking off 2021 with the latest in their acclaimed collaboration series, an innovative IPA brewed with their friends at Modern Times Beer in San Diego. Mosaic Oasis will debut statewide on draft and in 16oz 4-pak cans on January 14.

Modern Times is widely recognized as one the top IPA producers in the country and when the teams came together to work on a recipe, they were inspired to push the envelope with their experimentation through the inclusion of the newly released Talus hop varietal. Talus hops impart big aromas of pink grapefruit, dried roses, pine resin, tropical fruit, and sage, which makes it the perfect complement to the Mosaic hop’s classic tropical and citrus notes. The result is a dank and citrusy San Diego-style IPA with a colorful mosaic of intoxicatingly fruity aromas.

“I was nerding out; I’m such a fan of Modern Times. When Tim suggested using Talus hops to add some pine-like flavors to complement the citrus notes from the Mosaic hops, I thought “that’s a great idea! That is really cool.” You don’t see those two flavor profiles combined often. It’s what’s fun about working with other breweries, the visions that they have and the experiences they bring” says Karl Strauss Brewmaster Paul Segura.

Modern Times was equally as excited to brew the beer, adding, “This is one of those standing on the shoulders of giants moments, being able to collab and make something unique with Karl Strauss” said Tim Kamolz, Modern Times Director of Brewing Operations.

A collaboration long in the making, it is the perfect way to kick off a year that will see four unique beer releases from Karl Strauss, brewed with some of the most well-known and beloved breweries in the nation.