These photos were taken Thursday evening, September 30, day 16 of my Craft Beer Tour 2021, when I visited Medford, Oregon. My reasons for visiting Medford were pretty simple; I do not really enjoy driving in the dark when on these trips for the simple reason that I cannot see and appreciate the country I are driving through, this pretty much guaranteed I would be spending another night in Oregon. Since I had already visited Grants Pass in 2018 I decided that Medford would be my home for the night.

I don’t know if you have ever visited Medford, but it is not an easy town to navigate for a first time visitor; at least in my opinion.

As I have mentioned before, when I do these trips I pretty much fly by the seat of my pants, and Medford was a perfect example of that as I had zero clue where I would be staying and the name of one brewery that may, or may not, still be open according to rumors in Eugene. Since I really had no idea what else to put in my GPS, I aimed for Opposition Brewing Company.

As I was unfamiliar with Medford, my hopes were that I would find some motels in the general area of Opposition Brewing; if there were any, they were kept well hidden. Of course, truth be told, if you did not know where Opposition was located, it might come across as well hidden too. In fact, it was hard enough to find that I will start off by helping you find them.

I exited I-5 at exit 30 and turned right because that is what my GPS told me to do, but signs for hotels/motels suggested I should turn left; I was really hoping to pass by a motel or two, but none were to be seen. What you will see is a large shopping center with a RAM restaurant and Dick’s Sporting Goods on the left; keep going. The road changes its name from Crater Lake Highway to Rossanley when you cross over the 99. If it is sunset, you will know you are getting close because the sun should be directly in your eyes, which is going to make finding them a little tougher. When you pass Sage Road, you need to keep your eyes peeled for it on the left.

They have a small sandwich board out by the street, but there is a much larger The Human Bean coffee kiosk that is right next door to them and should be pretty easy to spot.

Parking can be a challenge, but there is a company next door with a large parking lot that I am guessing is pretty lenient about Opposition’s customers parking there; at least at the time of day I was there.

Opposition doesn’t have much in the way of signage that I noticed, other than the sandwich board on the street. When I parked my car and walked towards the industrial complex, I noticed the food truck and people playing cornhole so figured I must be at the right place.

The first thing I noticed when I walked in is that is seemed that literally everyone there knew each other. I don’t know that they did, but it sure seemed that way.

When I went to set up a flight, I was informed that tasters were $1.00 each so I got their Blast Radius Pale Ale, Sixth Seal Pale Ale, Devastated Sky Stout, IRA Hopstein India Red Ale, and Hop Cloud IPA. They were all good enough that I had to try a few more, so I ordered up their Peace Treaty Huckleberry Wheat, River Runs Red, and Purgatory Sour. Hop Cloud, River Runs Red, and Purgatory Sour were good enough that they earned a trip back to California

Opposition Brewing Company is located at 545 Rossanley in Medford. They are open Wednesday through Monday, are dog friendly, and offer cans and growlers to go. Food trucks are there occasionally.

While I was finishing up my last tasters I started asking about breweries that would be close to Opposition and open late enough for me to pay a visit; I was told I should check out Walkabout Brewing.

Walkabout Brewing was established around 1997 and brew on a seven barrel system. Even though I got there close to closing time, I was welcomed and allowed to photograph the brewhouse before I sat down to a flight.

On the night of my visit they had seven beers and a cider available on tap. I created a flight made up of the Shark Biscuit Kolsch, Workers Pale Ale, Platypus Porter, Jabberwocky Strong Ale, I’ll Have the IPA, and Rippah IPA. All the brews were enjoyable, but I really enjoyed the Jabberwocky.

Walkabout Brewing Company is located at 921 Mason Way in Medford. They are open daily, and have a nice patio outside that I presume is dog friendly. Walkabout offers cans and growlers to go and has food trucks, although I am not sure how frequently as there was none when I got there. I did have a very good time while I was there.

I hope to hit Sierra Nevada Brewing and Russian River Brewing on Friday; will keep my fingers crossed. Cheers! 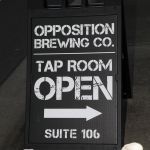 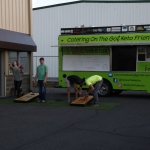 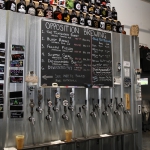 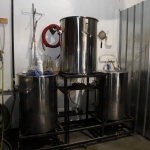 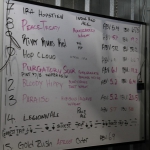 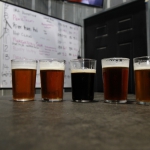 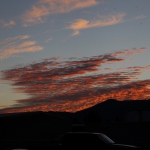 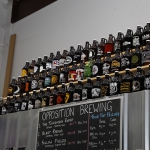 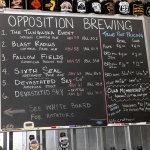 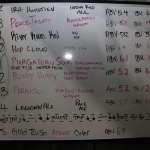 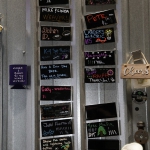 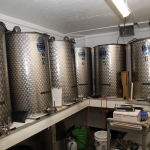 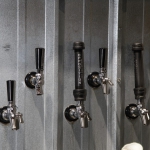 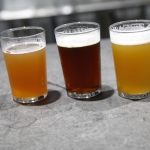 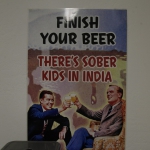 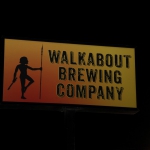 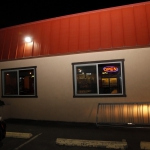 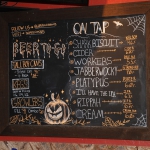 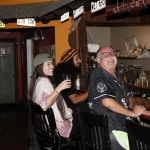 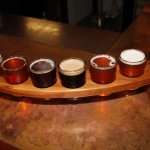 1 2 ►
Back to Photos of Opposition Brewing and Walkabout Brewing