These photos are of the breweries I visited in Michigan; in order, they were Founders Brewing (two visits), Bell’s Brewery, New Holland Brewing, Our Brewing, Rockford Brewing, Perrin Brewing, Elk Brewing, and Greyline Brewing Company.

After driving back and forth between Grand Rapids and Detroit, in the pouring rain, and another four hours of technical work, I was ready for Craft Beer Tour 2017 to get back on course. First stop would be the Founders Brewing taproom.

As we were pulling off the freeway it was easy to spot the huge red brick building with “Founders Brewing” emblazoned with yellow letters. As we were parking I could not but help notice the fermenters in the windows; they appeared to be three stories tall, but I could not see clearly enough to see where their feet were. I hoped I would have a good view of the brewhouse, because it looked a little too busy for me to ask for a quick personal tour like I do at the smaller breweries.

It was a Wednesday night, but the place was packed, inside and out. Luckily they have nice heaters over the tables outside because it was a bit wet and chilly. I quickly set into a flight consisting of Mosaic Promise, 10k IPA, Nitro Sumatra and the Barrel-Aged Sumatra; Mosaic Promise is probably always going to be my favorite. Since Backwoods Bastard was just released and I wasn’t driving, I had to try it. Suddenly the chill was gone. All the staff works together as a team, and over the course of a couple days friendships were formed. Thanks to Alex, Angela and all the rest of the staff for making it an enjoyable visit.

Founders Brewing is located at 235 Grandville Ave. SW in Grand Rapids and is open seven days a week.

The next day was Thursday and my sister had to work, so my brother-in-law Jim and I decided to do a little out-of-town exploring. I figured I should probably check out Bell’s Brewing, and as we were driving out to Kalamazoo I noticed we were passing Holland; I immediately knew where our second stop would be.

Bell’s is a cool little brewpub that looks like it used to be something in a prior life, but apparently it is a fairly recent addition that was just built to look old. They have an outdoor patio, but it is Michigan and they do not have cause to open it during the cold months.

Bell’s was smaller than I expected, but you cannot see the brewing operation; I was told it was liability issues but it seemed more like Area 51 when I walked around the building trying to get at least one shot. Apparently they do have tours on Saturday and Sunday, so it was a timing issue for me.

While the facility may have seemed small, the beer list certainly wasn’t; they had about 25 beers available. Trying to pick four for a flight was beginning to seem like work; I like it better when two of us are sharing two flights. I decided to try a fresh Two Hearted, Oarsman, Roundhouse and The Wild One. Roundhouse amazed me and I think The Wild One might be the best sour in Michigan; at least of the ones I tried.

Bell’s Brewery has two locations; the Kalamazoo location is a brewpub and the tacos I got, and salad Jim got were both enjoyed immensely.

The Bell’s Brewery location I visited is located at 355 E. Kalamazoo Avenue in Kalamazoo. They are open seven days a week.

After our meal and flight at Bell’s, we headed over to Holland, home of New Holland Brewing. As soon as I walked in the door I got the impression that they must be brewing at a different location because the equipment on display looked to be for decorative purposes only as it did not seem to be large enough to support the 20+ beers they had on tap.

Our beertender, Monika, explained that New Holland had another production facility on the other side of town, but a few of the brews were made in house. As Monika was very nice, and Jim wanted more food, we decided we would stay put. I ordered a flight consisting of their Xtra Time, Mad Hatter, Dragon’s Milk, and Hoptronix. While Dragon’s Milk is outstanding, Hoptronix made me think I was back home in SoCal.

We visited the New Holland Pub on 8th, which is located at 66 East 8th Street in Holland; they are open seven days a week and have a variety of their beers bottled to go as well as crowlers.

About two doors down from New Holland, my car was parked in front of another brewery, Our Brewing Company.

Our Brewing Company is a nano-brewery that has been open for about five years and apparently everything is small batch. As it had been a long day and Jim’s back was bothering him, and the beertender was too busy for me to take her away from the other customers so my visit was quick.

I tried the Poundtown IPA, it was solid, but my palate was past beer tasting notes; I seem to recall it was of the malty IPA variety. I would not mind returning and learning more about them and trying a flight.

Our Brewing Company is located at 66 East 8th Street in Holland; they are open seven days a week and offer crowlers to go.

Flashing back to the Great American Beer Festival, it was not all about how much beer I could drink, I like to network when it is possible. Attendees of GABF, or those of you that looked through my photos of the event, may have noticed the area set off as #BeerTravel.

Several cities from around the country had Convention and Tourist Bureau representatives in attendance as they are trying to become recognized as craft beer destinations. I chatted with reps from each city, but when I told the representative from the Grand Rapids Visitors Bureau that I would be in Grand Rapids within a week, she immediately informed me that Rockford Brewing Company had just won Small Brewpub and Small Brewpub Brewer of the Year and that it was only 15 miles from Grand Rapids; so that is how Jim and I ended up there on Friday afternoon.

Rockford Brewing is a small brewpub with a relatively small brewhouse, but they definitely put out a quality product, both with their beer and their food. They won Small Brewpub and Small Brewpub Brewer of the Year because they won two medals this year; Silver for Sheehan’s Stout and Bronze for their Rogue River Brown. I decided to have a flight consisting of their two medal winners as well as their Hoplust and Little George IPAs. While all four were solid, it was easy to see why Sheehan’s Stout got a medal; Hoplust was a delicious IPA.

I have to mention the food; especially if you like Caesar salads. My brother-in-law loves Caesar salads and ordered them pretty frequently over the course of the few days we were together; he was very impressed with Rockford’s Caesar, primarily because they use real anchovies and are pretty generous with them. I enjoyed my Reuben sandwich, but not nearly as much as Jim enjoyed that salad.

Rockford Brewing Company is located at 2 East Bridge Street NE in Rockford; they are open seven days a week. They bottle Hoplust and have growlers available of everything else.

As I mentioned in my article about Founders 20th Anniversary, I had been invited to join the winners of Founders “No Regrets” contest on their tour of the Founders Brewing production facility. While I could not commit to the time required for the tour, I did offer to take a photo of the group, so we headed back to Founders.

Since it was my second visit in two days, I was beginning to make friends with the staff, as is evidenced by some of the photos. I really enjoyed my time there.

Friday evening my sister Ruth wanted to take me to a couple of her favorite places; we started off at Perrin Brewing Company, a brewpub in Comstock Park. I am just going to say it, I think Perrin Brewing impressed me the most of any brewery I visited in the Grand Rapids area. Not only did they have 24 beers available, everything I tried was well done. Sonic Highway, their black IPA was really enjoyable.

Perrin Brewing Company is located at 5910 Comstock Park Drive in Comstock Park. They are open seven days a week and have cans, bottles and crowlers to go.

As we drove over, my sister mentioned they had a brew called PB & J’ALE’Y, she said she had never tried it and thought it sounded disgusting; I knew I was only having a flight and that would definitely be included.

Elk Brewing has a 15bbl brewhouse and keeps 15 or 16 beers on tap at all times. I ordered my flight consisting of Super Alpha, Dank-a-Licious, Imperial Rye Oatmeal Stout, Alpha O.G., PB & J’ALE’Y. I am not sure how I forgot to take any notes on this flight, but the PB & J’ALE’Y was a fun beer. It tastes just like a peanut butter and grape jelly sandwich. I would not drink a pint, but I would bring a bottle or two to a bottle share; for those interested, yes, they bottle it. Even my sister, who earlier thought it sounded disgusting, enjoyed it.

The Elk Brewing Company location I visited is located at 400 Dodge Street in Comstock Park. Elk Brewing is open seven days a week and sell bottles, growlers and crowlers to go.

My eighth and final Michigan craft brewery to visit was Greyline Brewing Company on Saturday afternoon after Jim and I attended Founders 20th Anniversary party. While we had a great time at Founders, we both were looking for somewhere a little warmer, quieter, and less crowded. When I visit new breweries, I usually ask for recommendations of others in the area I should visit. A couple people had mentioned Greyline, and it was close as well as on the way home.

Greyline Brewing had 15 beers on tap and is also a brewpub, so we took advantage of the fact the there were no lines and had a late lunch. I tried a flight consisting of Fade, Blackguard, Devil Bunny, and Barrel Candy; the last two, a DIPA and their BA Barleywine were definite favorites and a pretty good way to end the Michigan portion of my Craft Beer Tour 2017.

Greyline Brewing Company is located at 1727 Alpine Avenue NW in Grand Rapids. They are open seven days a week and offer crowlers to go.

I had a great time in the Grand Rapids area and wish I could spend that much time in each of the cities I visited. Thanks to Ruth and Jim for the hospitality and to the staff of every brewery I visited; you made my journey quite enjoyable. Next stop, Ohio. Cheers!

Back to Craft Beer Tour 2017, Michigan
[Show as slideshow] 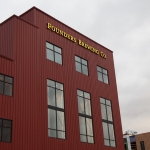 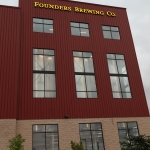 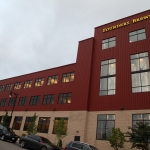 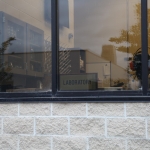 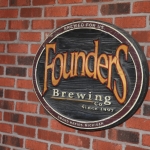 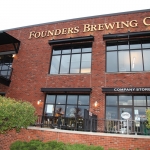 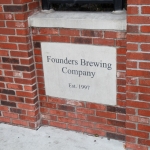 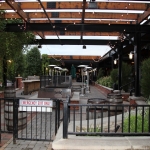 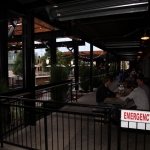 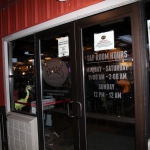 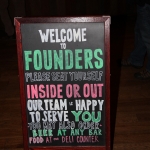 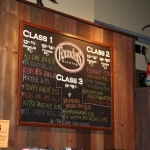 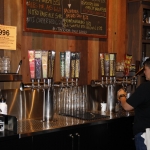 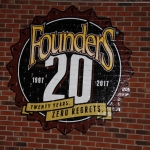 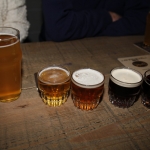 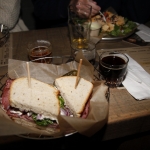 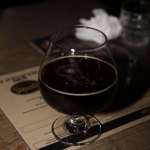 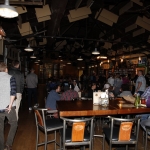 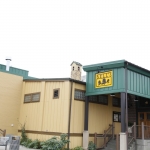 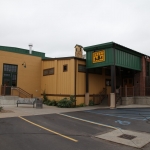