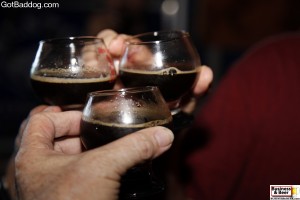 On November 17, 2013 the Alpine Village in Torrance will hold their 2nd Annual Alpine Kraft Bierfest from 3:00 PM until 8:00 PM inside the Alpine Inn, located at 833 West Torrance Boulevard in Torrance, CA. It is located right off the Harbor Freeway (110) and the San Diego Freeway (405). The Alpine Kraft Bierfest is not the same as their long running (46 years) Oktoberfest and is exactly the opposite as it focuses on “hard-to-find, one-of-a-kind and out-of-your-mind American craft brews” rather than the German and Czech beers you normally find at Alpine Village.

If you are thinking, “Second annual, I don’t remember the first one,” do not feel too bad, last year’s event was not very well promoted so it meant that more than 35 brewers providing more than 100 different beers and no lines. This year promises to be even better as the event is being moved inside to the Alpine Inn rather than the big tent that houses Oktoberfest. What this means to you is more beer, limited capacity of the Alpine Inn and the availability of their restaurant if you want to pause from your beer tasting and try some authentic German food. Since November 17 is a Sunday, they will be having their brunch, so you might consider attending their Sunday brunch before the bier fest begins. 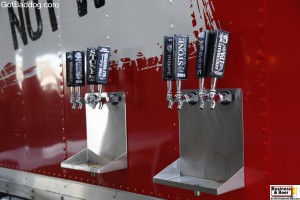 So, what sets Alpine’s Kraft Bierfest apart from the others? Most of the beer festivals I cover are a fundraiser of one sort or another. As a result, most of the breweries are asked to donate a keg or two and you frequently find the flagship beers as the only options. Now, there is absolutely nothing wrong with that model, but if you attend a lot of beer festivals you eventually start running into the same beers over and over. The Alpine Kraft Bierfest is not a fundraiser; it is all about the beer. Alpine Village has gone out, sought and bought the beers that will be available at this event. Last year they purchased the last two kegs of Enjoy By 09.21.12 which was poured at the event; luckily, Alpine has a great beer cellar so beer that was not poured at the first bierfest was available for sale later at the Alpine Inn. For the next several months after the event, they had one of the better rotating tap lists in town. This year promises to be even better as there are some beers that have been aging a while, like Stone’s 12.12.12 Vertical Epic Ale. A few of the other breweries and beers I know about are Allagash’s Saison Rye, Hugh Malone and Bourbon Barrel; The Bruery’s Bryeian; Uinta Brewing Company’s Sea Legs Baltic Porter; Napa Smith’s Grateful Dog; North Coast’s Grand Cru; Mission Brewery’s Mission Armada; Manzanita Brewing Company’s 3rd Anniversary Ale; and North Coast Brewing’s Barrel Aged Old Rasputin XV. As you can tell, this is going to be a great event for craft beer aficionados.

As a reader of CraftBeerGuy.com you are entitled to a 20% discount on tickets if you buy them ahead of time. Tickets will be $30 each at the door or $25 each if you buy tickets ahead of time online. To get your 20% discount use promo code “Baddog” and you can buy up to 30 tickets for $20 each (maximum of 30 per order). This offer is only good through November 11, 2013, so do not delay. As soon as I get a list of the beers and breweries represented I will write another article; in the meantime, feel free to check out the photos from last year to see the amazing tap list you missed. Alpine’s Kraft Bierfest is going to be epic, do not delay and get your tickets today. Cheers!