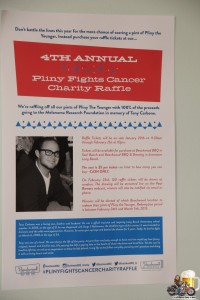 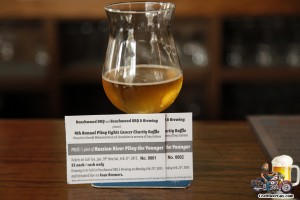 The process is simple and if you read this through to the end, there is a special offer for you. Raffle tickets are $5.00 each and there will be 130 winners. Tickets are on sale at both the Seal Beach and Long Beach locations between January 20 and February 21, 2015 at 10:00 PM. All ticket purchases are cash only. The drawing will be held Monday, February 23 and will be streamed live via the Four Brewers webcast. Winners will be directed to which location they can get their pint and they must be redeemed between February 24 and March 5, 2015; you want to drink Pliny fresh.

UPDATE: I have two passes for two to join me on a personal tour and tasting at El Segundo Brewing Company; to qualify is simple. If you purchase a ticket for the Pliny Fights Cancer Raffle simply take a photo of your ticket[s] and either Like and tag me on Facebook or Follow and tag me on Instagram. I will pick a random person on February 22; each ticket that you tag me in gets you an additional chance. Good luck. Cheers!