These photos were taken Saturday afternoon in Redondo Beach, where Blackball Brewing Company held their SpringFling 2019; an afternoon of beer, barbecue, and hanging out with old friends while making some new ones.

I am confident a majority of you have never heard of Blackball Brewing, and a good portion of you that have heard of them are only familiar with them because you have seen me, or someone else walking around town with the very recognizable Blackball logo. Personally, I never heard of them before March 13, 2018; and I met the guys behind Blackball for the first time on Saturday.

If it seems odd that I would know the exact date that I became aware of them; you can thank Instagram, as I know I where I was given it, and I posted a photo of the beer I was drinking at the time; a Fresh Squeezed by Deschutes.

The afternoon of May 13th I was driving down Prairie in Lawndale when I thought I would stop in and check out the newly opened Lawndale BrewHouse; I mean with a name like that I pretty much had to. I was the only customer in the bar when the owner walked in and we started chatting. After a few minutes of talking he excused himself and returned with a Blackball Brewing truckers cap; he said it would look better on me than him so I accepted the gift.

I am not sure that I could give you much on the way of history on the other dozens of hats that I own, but almost from the beginning of owning it I received compliments on the hat, and I had a local brewery owner or two ask me who these guys were and where/when they were opening. All I could tell them was what I had heard at Lawndale BrewHouse; Blackball Brewing was essentially a couple homebrewers in North Redondo, and if you happened to go by their house and saw the Blackball flag, that meant they were brewing, or hanging out, and you were welcome to come have a beer. That sounded pretty cool and even though all I knew was that they were “somewhere around Harkness and Aviation” I kept an eye out whenever I was in the neighborhood. It was last September I decided I had to start putting some effort into this.

I was walking down Galveston Avenue in Bend, Oregon on my way to meet a friend at Sunriver Brewing when I heard some guy yell out, “I love Blackball Brewing!” Naturally I had to stop and ask this guy in Bend how he knew these homebrewers in Redondo Beach. Long story short, “the guy” was Matt Molletta, formerly of Crux Fermentation Project and now co-founder of Boss Rambler Beer Club, in Bend. Apparently Molletta met Blackball when they were both involved with a local beer festival in the South Bay. They were now firmly on my radar.

I started following Blackball on Instagram and learned that they occasionally have events like the SpringFling they had on Saturday. Due to a scheduling conflict I got to the event as it was winding down, but I was able to meet the faces behind Blackball Brewing and try a couple tasty beers.

Blackball Brewing is made up of two high school friends, Brewzer and Lumpy (high school nicknames), who graduated from Mira Costa in 1980. One day in 2015 they were together when they decided they wanted to brew beer. They do a pretty good job of it, especially considering they have no training. They haven’t even joined a homebrew club. When I was there they had their crowd favorite Towhead Blonde, Red Tide Red Ale, and Chum IPA available, as well as a cider they did.

As I was only going to have two, I started off with the Red Tide which I thought was very good; really nice maltiness. I followed that with the Chum IPA, which was another solid brew. The thing about Chum is that every time they make it, it is different than the last batch. Chum is made up with the leftover hops and grain that they have from other brews; you might call it their rotating hops series.

While they are currently homebrewers, there are aspirations of some day opening a brewery, but it will have to be within a few miles of the beach. In the meantime, they brew beer for themselves, their friends, and some charity beer festivals. To pay for supplies they sell their Blackball Brewing merchandise, and throw occasional barbecues like they did Saturday; featuring their long time buddy, Chef Silvio of Silvio’s Brazilian Barbecue.

While I would like to tell you that if you are ever in North Redondo you should keep your eyes peeled for the Blackball flag, Brewzer and the Blackball brewhouse moved to Lomita, apparently about a mile from Burnin’ Daylight. So, if you are cruising Lomita and see the flag, stop on by. Otherwise, follow Blackball Brewing and watch for their next event. I know I will. Cheers! 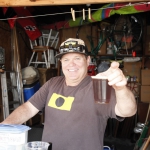 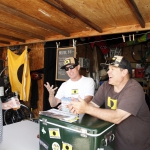 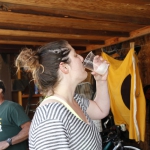 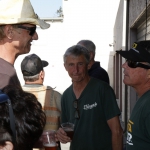 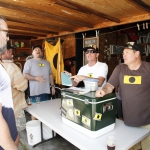 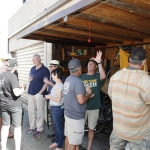 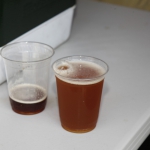 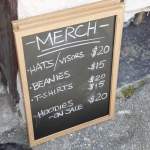 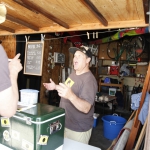 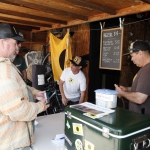 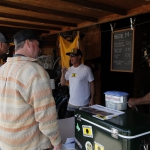 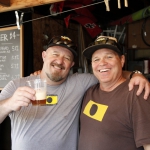 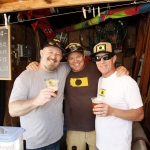 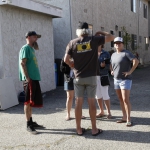 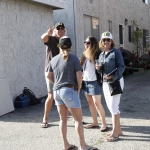 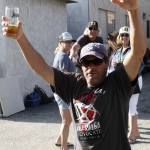 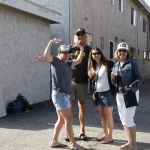 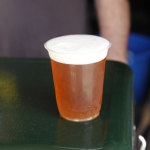 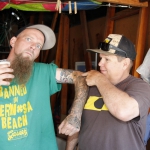