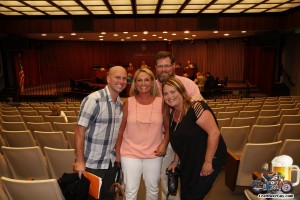 I soon met with the Schulz and Kolb families where I learned how the name “Scholb” came to be (a combination of the two families last names) and a little about their history and the style of beers that would be brewed. It was then that I was also invited to attend and speak at their upcoming CUP Hearing with the Torrance Planning Commission. Last night the planning commission met and Conditional Use Permit, CUP15-00012 was granted.

Essentially they were granted the ability to brew beer and do retail sales via the tasting room, have food trucks and they can be open five days a week; Wednesday and Thursday from 3:00 to 9:00 PM, Friday and Saturday from 11:00 AM to 10:00 PM and noon until 6:00 PM on Sundays. They were also granted the ability to be open on New Year’s Eve and the night before Federal holidays.

While I had already sent in a letter of support, the Planning Commission invited me to come up and say a few words, so I took advantage of it.

When Scholb had initially submitted the paperwork for their CUP, five days a week was the norm for the Torrance tasting rooms; but that was prior to Absolution Brewing Company’s modification request that was held a couple weeks ago. At that time the Planning Commission granted Absolution the ability to be open seven days a week if they desired. I mentioned that it was my feeling that since the bar had essentially been lifted by Absolution’s modification hearing in July, the Planning Commission should just use a default of seven days a week since no one was being forced to stay open seven days, but it would eliminate the need for a second hearing when Scholb decided that they wanted to be open seven days a week. At that point I was invited to stay for an agenda item that would be dealing with the modification of Conditional Use Permits.

Back in July when Absolution Brewing had the hearing to modify their existing Conditional Use Permit, the Torrance City Attorney mentioned that there might be a way to streamline the modification process that would eliminate the need for a hearing every time someone wanted a simple modification of their existing Conditional Use Permit. Last night, the Planning Commission agreed that if the modification of an existing CUP was not changing the intent of the permit issued the modification hearing should not be required. What this means is that if Scholb, or Smog City or any of the other Torrance breweries want to modify their Conditional Use Permit they can save time and expense by having the Planning Department modify their permit without having to appear before the Planning Commission. When the commission asked my thoughts, I said they had my blessing and I was sure that the existing Torrance breweries would agree. I also thanked them for helping ensure that Torrance remains the craft beer destination it has become.

Scholb Premium Ales will be located at 2964 Columbia Street in Torrance. They do not have their brewhouse yet, but it should not be too very long before we are able to sample their hopcentric ales. Congratulations to Scholb Premium Ales and cheers!