New growler rules: Nothing is going to change 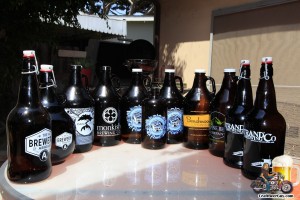 Growlers of all shapes and sizes

I should probably begin this story by explaining that California has very different laws than what I presume must be most other states when it comes to beer growlers. From all the complaining I hear if you walk into a microbrewery in San Antonio, TX with a growler from Portland, OR you are not going to have a problem getting it filled. Reverse the scenario and you have the same result. Apparently, some places will fill plastic jugs if you ask them; not that I have ever seen it done; but from what I read it is not too far from the truth. Now, if you take a growler from a microbrewery in Torrance, CA and try to fill it at another microbrewery anywhere else in the state you will be denied. This was due to the California Department of Alcoholic Beverage Control (ABC) which basically said that only a container that was printed with the brewery’s own logo and address could be filled with beer. Essentially, it would be the same as putting Coors in a Budweiser bottle; it could not be done.

In February of this year the California Craft Brewers Association (CCBA) held an ABC workshop and the head of the ABC, Jacob Appelsmith made a comment about the interpretation of the ABC’s rules. It was interpreted that breweries could fill non-native growlers and people started getting excited. The LA Brewers Guild issued a statement that there were local brewers getting approval for the new labeling; there were rumors that such heavy hitters as Russian River Brewing, was ready to start filling non-native glassware and then The Bruery said they had a new policy on non-native glass. People started getting excited, finally they would not need to own 10 or 15 or more different growlers. Heck, I even started working on a plan to take full advantage of this new item I could market. Then I started talking to local brewers and actually read the laws instead of the interpretation of someone else. And there are the problems . . . as I see them.

In a perfect world California craft beer fans could bring their glassware into any new microbrewery they discovered and get a fill without having to expand their growler collection, which is what people want. Now, when word went out that Mr. Appelsmith said any brewery could fill a growler from another brewery, just that the other brewery’s logo had to be covered I was immediately brainstorming ideas for a generic growler cozy. Since I know local brewers I started asking questions and realized that non-native growlers were not going to happen with today’s regulations. First off, there is section 25200 of the California Business and Professions Code which states:

The ABC gave it some thought and decided that an existing label on a growler may be covered with a new label reflecting information that correctly identifies the product. The catch being that the new label had to completely cover up the original labeling and it could not be easy to remove. There went my growler cozy idea. Apparently there had been some talk about using heat shrink wrapping, but the people I spoke with were not enthusiastic about this idea as it would be far too time consuming. Besides, most of the brewery owners I have spoken to are very fond of their logos and a heat shrink wrap is going to look cheap and growlers are labeled for the branding. Cheap logos are not good branding.

Since it had hit the LA Times that The Bruery in Placentia was “amending their policy” on filling non-branded growlers I decided to take a look for myself. While it is true that The Bruery will fill growlers that do not have their brand on it, the growler must be the exact type of glass they normally use, a 2-liter blank, Palla-style swing top growler. If you do not have one, they will sell you one for the same cost as a branded one. The Bruery is kind enough to give you instructions on how to remove another brewery’s logo, but there is no guarantee that said brewery will honor it anymore if you do; so make sure it is the right type and you won’t need it any more. On the upside, it seems that the style of growler The Bruery uses is pretty popular, so if their policy becomes the norm, California will have the nicest growlers in the nation.

Since it was pretty apparent that nothing new was really happening down here in Southern California, I decided to see how Russian River was doing with their new growler policy. On the Russian River Brewing blog, dated June 28, 2013, they state:

Due to a recent reinterpretation of an existing liquor law by the California Department of Alcohol Beverage Control, breweries holding Type 23 licenses are now allowed to fill other breweries growlers with the proper legal information and state label approval. We, along with several other California breweries, have decided to continue to fill ONLY our own growlers at this time for the following reasons:

They go on to itemize basically the same things heard elsewhere, they like the glass they use and feel it is the best for the beer (they use the same as The Bruery, by the way), sanitation and spare bottle caps, their draft system is set up for their type of bottle; and the most important, branding.

So it comes down to this; California law needs to change pretty radically before we are able to just bring a growler from one brewery to another and get it filled. Branding is important and the breweries that are going to survive need to use all the marketing tools available to them; growlers are a big free marketing tool for them. A blank growler with a tag identifying the brewer and the contents is not nearly effective as a 64 ounce, nicely rounded growler with your logo covering most of it. Do not look for any big changes anytime soon.

5 Responses to New growler rules: Nothing is going to change