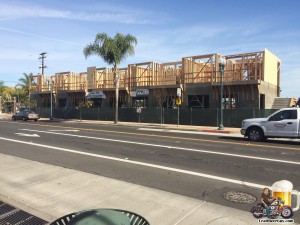 On Monday evening, a couple dozen people attended a City of Lomita Planning Commission meeting, where the topic of discussion was whether or not to allow a brewery to sell their beer on premise, and if so, to determine if Project Barley would be granted a Conditional Use Permit to open a microbrewery with a tasting room on Pacific Coast Highway in Lomita.

If the above paragraph makes you wonder how Project Barley somehow gives Lomita two craft breweries, then you do not follow this site as closely as you should. Last April I wrote that Burnin’ Daylight Brewing Company was granted their Conditional Use Permit by the Lomita City Council; Burnin’ Daylight had a couple extra hoops to jump through as there were a couple laws that had to be modified to allow them to sell beer to go. Burnin’ Daylight will be a brewpub, which means their rules are a little different, by definition. Project Barley can manufacture beer, but a law needs to be changed to allow them to have a tasting room, and the first steps were crossed this past Monday evening.

About a dozen people spoke before the Planning Commission, including Steve Farguson of Absolution Brewing and Bob Lake of Burnin’ Daylight Brewing; both of whom spoke in favor of forwarding Zone Text Amendment 2018-02 & Conditional Use Permit No. 309 to the Lomita City Council for approval. One of the commissioners seemed a little surprised that Bob Lake would speak in favor of a “competitor” moving into the city. Lake explained that he knew it was a matter of time before additional breweries came to Lomita, he just did not expect it so soon.

While a majority of the audience was in favor of the proposed microbrewery, there was one resident that was upset with a cross-fit gym in the same shopping center and he felt the tasting room would just make things worse. Burnin’ Daylight head brewer Brendan Lake stated that while he agreed with the positive comments made by those in favor of the proposal, he did not feel it was a good location. Be that as it may, the Planning Commission voted unanimously to suggest to the City Council that they approve Zone Text Amendment 2018-02 & Conditional Use Permit No. 309. The Lomita City Council will hear the matter on Tuesday, May 1, 2018.

Project Barley founder, Brent Reger of the popular local band Barley, would appreciate letters of support be sent to the Lomita City Council if you cannot make the city council meeting. Those emails can be sent to Alicia Velasco at a.velasco@lomitacity.com. The following is the Letter of Support I sent to the Planning Commission to give you an idea of the format and things you might bring up. You probably should not just copy it.

My name is Lloyd Brown; I am a Torrance homeowner for more than 30 years and South Bay resident for well over 50. I am the writer for CraftBeerGuy.com and an advocate for local craft breweries. While I am not a Lomita resident my work with CraftBeerGuy.com means that I spend quite a bit of time visiting the numerous breweries and craft beer and cider establishments in and around the South Bay area. Hopefully you will recall that I wrote to you and appeared at the CUP hearing for Burnin’ Daylight Brewing.

This time, I am writing in support of granting Project Barley’s Conditional Use Permit Application 309.

As a supporter of the craft beer movement that has emerged in Los Angeles County over the past several years, I decided it was important for me to attend CUP hearings for craft breweries, the first of which was in Torrance, for Smog City Brewing back in September 2012.

At that time I made a couple predictions about what craft beer would mean to Torrance; I think it is safe to say that I nailed it. In fact, our past and current mayors, Scotto and Furey, have both mentioned craft beer in their State of the City addresses and how it has become the newest growth industry in Torrance. There have been numerous articles going around the mainstream press discussing the millions of dollars and hundreds of jobs craft beer has brought to Torrance. I have heard Mayor Furey mention attending events with Mayor Waronek, so I cannot help but think that Mayor Furey must have mentioned what the craft beer industry has done for the City of Torrance; these same benefits are being seen in Redondo Beach, El Segundo, Hawthorne, Carson, San Pedro, Inglewood and Gardena. Now it is Lomita’s turn and with the inclusion of this new brewery and tasting room, Lomita will become a craft beer destination.

One thing I did not predict, but found to be quite common, is the generosity these breweries show to the community; frequently donating their beers and time to numerous non-profits.

As this is one of the first craft breweries for Lomita, I will address concerns that some might have, as they have been concerns in the past in other cities.

There has been concern that these craft brewery tasting rooms are going to evolve into a bunch of beer bars. I have visited craft brewery tasting rooms up and down the state of California as well as over a dozen other states, and not once have I entered one that came off as a beer or sports bar. That is exactly the opposite of what a craft beer drinker is seeking; and from the conversations I have had with numerous craft brewery owners, that is not what they seek either. Most of them are doing it for the love of the craft; which is reflected in the quality of the brews they come up with.

Craft beer drinkers go to breweries to enjoy the freshness of the beers and an opportunity to talk to the brewers and learn more about the art. Most brewers seem to enjoy this interaction with their customers. Craft beer drinkers are not coming to a tasting room to watch TV and get drunk. Interaction between customers is much more common and the conversations seem to be more in-depth as they discuss the different brews they have tried. Strangers become acquaintances then friends as a result of American craft beer.

In February 2016, I was invited by the Torrance Planning Commission to participate in their discussion regarding the streamlining of their CUP Modification process. As far as I was concerned, one of the more interesting statistics was with regards to public safety since the explosion of craft breweries in Torrance. In 2015 there were eight calls for assistance to the five production brewery locations and four to the brewpub locations. As I recall, of those, they reported one disorderly report.

The Community Development Department had Torrance Police Department assess whether or not DUIs had increased with the number of new breweries. To do this they compared their statistics from 2010 through 2012 (prior to the tasting rooms coming to Torrance) and compared it with 2013 through 2015. As it turns out, DUIs had dropped 8.5% in the last three years.

As far as parking is concerned, I believe this has become a non-issue for the same reason that drunken driving arrests have decreased; ride sharing services like Lyft and Uber.

Approving this CUP request has another advantage in that having two craft breweries will help Lomita become a craft beer destination. I have spoken with both Mr. Reger and Mr. Lake of Burnin’ Daylight and they both agree that their respective businesses will feed off the presence of the other.

As a homeowner, voter, tax payer and craft beer fan I encourage this Commission to grant Project Barley the Conditional Use Permit as applied for.

Thank you for your time and consideration.