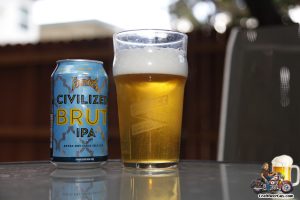 Founders Brewing Co. has announced Civilized Brut, the first seasonal release of 2020. Civilized Brut is brilliantly bubbly, refreshingly crisp and stunningly clear, similar to a fine Brut Champagne. Designed for a more sophisticated IPA drinker, it has a clean and restrained bitterness. The clarity and malt sweetness allow the hop notes to tantalize your senses in a bold yet never-overpowering way. Civilized Brut marks the first seasonal release in Founders Brewing Co.’s 2020 Brand Calendar.

“Nothing says refreshment like a dry, sparkling, hop-forward IPA,” said Brewmaster, Jeremy Kosmicki. “Civilized Brut has just the right amount of bitterness and hop flavor to not overwhelm the clean and dry finish of this beer, while the high effervescence makes it feel like a party in every sip.”

“As the majority of brewers are introducing hazy, New England Style IPAs in the market, we have decided to take another road,” said President Dave Engbers. “Civilized Brut is a crystal-clear IPA that’s bursting with effervescence and elegant aromatics. Perfect for champagne and IPA aficionados alike.”

Civilized Brut (6% ABV) will begin shipping in November 2019 and will be released in both the Grand Rapids and Detroit taprooms on October 30. It will be available in 6-pack cans, 15-pack cans and on draft across the brewery’s distribution footprint, which now includes 50 states. Civilized Brut will precede Pilsner and Mosaic Promise in the brewery’s 2020 seasonal lineup, with more details to come on the 2020 brand calendar later this year. Cheers!