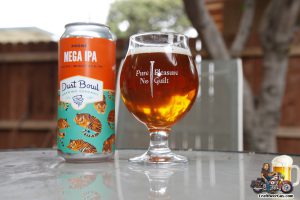 Known for his expertise in brewing high-alcohol beers, Brewmaster Don Oliver shares some thoughts on his latest Mega intro, “When we first released Supine Mega IPA in 2020, I had already started on the recipe for Prone. Although not originally planned for release this year, there was a lot of excitement around the Mega IPA Series, so we chose to add Prone to the lineup. The triple dry-hopped Mega IPA should satisfy the fans of big beers with huge hop character.”

Prone is expected to hit retailer shelves in April primarily in California and parts of Nevada. The bright orange and green label mimics the popular Supine label, but Prone naturally showcases tigers in the prone position.

Dust Bowl Brewing Co. produced its first beer in May 2009. The company is owned by Brett and Karen Tate and Brett and Camy Honoré, who became the Tate’s business partners in 2010. The company built and moved its production to a 30,000 sq. ft. brewery and taproom, located in Turlock, California, in June 2016. Dust Bowl Brewing Co. beers are available in 5.2 and 15.5 gallon kegs along with selected styles in 22 oz. and 12 oz. bottles and 19.2 oz., 16 oz. and 12 oz. cans. Distribution includes California, Nevada, Oklahoma, Pennsylvania and Texas. Dust Bowl Brewing Co. achieved Regional Brewery status in 2020 with an annual production of over 16,000 barrels. The craft brewery showcases a wide variety of its beers at its two taprooms, the Brewery Taproom located in Turlock, California and the Tap Depot in Monterey, California. More information may be found at www.dustbowlbrewing.com.