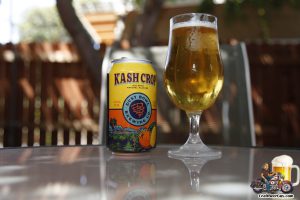 Dust Bowl Brewing Co. has announced the release of Kash Crop Orange Mango Ale, the latest addition to the Northern California brewery’s year-round portfolio. The roll-out is just in time for consumers looking for a thirst-quenching summertime beer.

“This is a crisp refresher that comes in perfect time for the warmer weather,” comments Don Oliver, Brewmaster. “Beer fans can expect a light bodied beer with huge fruit aroma and an orange/mango finish that is slightly sweet.”

Kash Crop is easy-drinking at 4.5% ABV, with low bitterness at only 10 IBUs. The new beer is available in 12oz./6 pack cans, and 5.2 gallon and 15.5 gallon kegs. It is sold through Dust Bowl’s growing network of wholesalers servicing California and Nevada, and at Dust Bowl Brewing Co. taprooms located in Turlock and Monterey, California.

In signature Dust Bowl fashion, the Kash Crop label tells a unique story starting with the name. “Kash” once represented an ancient form of payment in beer, while the landscape is a nod to the brewery’s Central Valley location amidst orchards and crops as far as the eye can see.

Dust Bowl Brewing Co. produced its first beer in May 2009. The company is owned by Brett and Karen Tate and Brett and Camy Honoré, who became the Tate’s business partners in 2010. The company built and moved its production to a 30,000 sq. ft. brewery and taproom, located in Turlock, California, in June 2016. Dust Bowl Brewing Co. beers are available in 5.2 and 15.5 gallon kegs along with selected styles in 22 oz. and 12 oz. bottles and 19.2 oz., 16 oz. and 12 oz. cans. Distribution includes Central and Northern California, parts of Southern California, Nevada, Oklahoma, Pennsylvania and Texas. The craft brewery showcases a wide variety of its beers at its two taprooms, the Brewery Taproom located in Turlock, California and the Tap Depot in Monterey, California. More information may be found at www.dustbowlbrewing.com.