These photos were taken Tuesday, September 18, in Durango, Colorado; which was day two of my Craft Beer Tour 2018.

When I left Flagstaff, I headed east on US Hwy 160 for a 300 mile drive through some very scenic areas. Along the way is the Four Corners Monument, where Arizona, New Mexico, Utah, and Colorado meet; a volcano or two, and some dinosaur footprints you can touch, if desired. As I have already seen that stuff, I just made a mental note of yesteryear and continued on.

If you are in a hurry, this is not a good route to take; there are lots of two lane stretches, and even one one-lane stretch. You go through a couple Indian reservations so there are towns along the way that have 25 MPH speed limits.

I am not really sure why I decided I wanted to go to Durango, other than I had never been there and I had thought about going to their 23rd anniversary at the beginning of the month, but my connection there moved to Three Weavers and the Brewers Association gave me passes for GABF again, so the anniversary was eliminated from my calendar. Plus, if I went to Durango I would have to go through Cortez, home of Main Street Brewery.

I admit, I don’t go to Main Street frequently, but whenever I am within 100 miles I make a point of stopping by. In fact, in 2010 when we first discovered it, we made a 100 mile detour just to have lunch there. Unfortunately, the beer gods were not smiling on me today; Main Street didn’t open until 3:30 and it was only 1:30. There is not enough to do in Cortez to hang out in their 96 degree weather waiting for Main Street to open; I would be in Durango before that happened.

Ska Brewing is definitely a destination brewery, in that you are not going to stumble upon it; you have to want to go there. Durango is in a very scenic area, so naturally, the view from the parking lot is very nice. While Flagstaff reeked from the smoke coming from fires around Sedona, the Ska parking lot smelled like a brewery brewing beer. It was quite pleasant.

Ska has a tasting room, and a large picnic area that has outside taps; but those taps were not open when I was there. This presented a bit of an issue for me as the taproom is not dog friendly, while the patio was; however, I couldn’t order beer out there so Buddy got stuck in the car for a while as carrying a flight and camera while controlling a dog looking for whatever scraps of food he could find on the floor was more trouble than it was worth.

I did not bother taking the tour, but as I am sure you can imagine Ska Brewing is pretty big. When I was there, they had 15 in-house brews available, four of which were small batch experimentals, and they had one tap featuring Left Hand Brewing who they distribute for. I picked a flight of five, one of which was an experimental, Dark & Stormy Daniels (a kettle soured brown ale); the others included a red ale and two versions of Modus Hoperandi. I enjoyed the Dark & Stormy Daniels the most. I tried the Steel Toe milk stout for dessert, but the sour brown was my favorite.

Ska Brewing Company is located at 225 Girard Street in Durango. They are open seven days a week and have a kitchen called The Container, which I presume is a different entity. They have growlers, crowlers, and canned brews available to go. The outside patio/beer garden is dog friendly.

It was still early but I needed new beers to choose from, so I went on my Facebook page and asked my loyal followers for their suggestions; the opinions were split between Animas Brewing and Steamworks Brewing Company. Since Animas was closest, I tried to go there. You might notice I said, “I tried.” Whoever met me at the door gave me some b.s. story that Buddy couldn’t go on their patio due to the health code. They wanted me to put him in the car or chain him up on the outside of the fence; that wasn’t happening. It looked interesting, but their attitude combined with mine meant I will never know. I headed over to Steamworks, with no regrets.

While the two breweries I visited in Flagstaff had a combined eight years of brewing, Ska has 23 and Steamworks is going on 22. I think that says something.

Anyway, Steamworks is a brewpub that also offers wine and a full bar. It definitely comes across as more upscale than any of the breweries I have visited in the past two days. They have a 7-bbl system that offers 14 taps ranging from a kolsch to a barleywine, with a few IPAs, porters, stouts and wits to round things out. I opted for a flight consisting of their Kenny’s Pain pilsner, Colorado Proud and Third Eye pale ales, Night Train Schwarzbier, Backside Stout, and Conductor DIPA. Third Eye Pale Ale was definitely my favorite. As I hadn’t eaten, I tried their gyro; it was pretty good. Their menu had lots of options; but I am pretty lazy when it comes to food. Judging by other plates I saw delivered, the food sure looked and smelled good.

Steamworks Brewing Company is located at 801 E. 2nd Avenue in Durango. They are open seven days a week and offer growlers, as well as some bottles and canned 6-packs to go. Cheers! 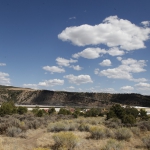 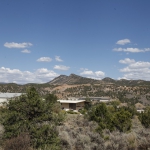 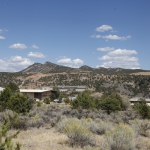 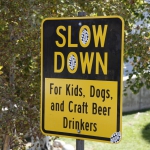 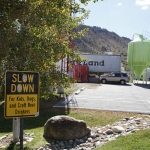 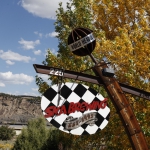 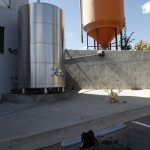 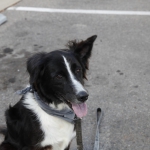 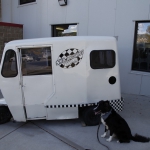 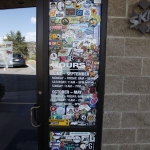 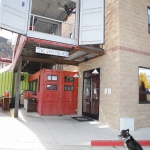 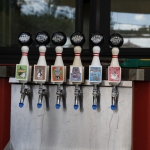 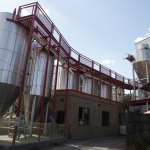 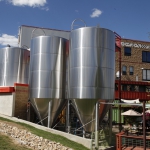 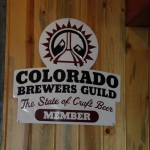 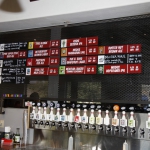 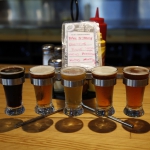 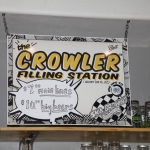 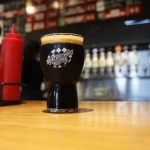 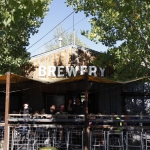 1 2 ►
Back to Photos from Ska Brewing and Steamworks Brewing