When the Brewers Association offered me the opportunity to cover the 2017 Great American Beer Festival I decided that I would use the opportunity to visit some of my siblings and perhaps enjoy some craft beer along the way. These photos were taken at Blue Blood Brewing, Zipline Brewing, Upstream Brewing, and Kros Strain Brewing.

The first night I went out in Denver, I happened to be sitting next to Brian Podwinski and his wife, Amanda. During the course of our conversation, they mentioned that they owned Blue Blood Brewing Company in Lincoln, Nebraska.

Brian started telling me about how his 12,000 square-foot brewery was located on top of a place called “Robber’s Cave”, which was a huge maze of sandstone cave tunnels and the site was originally going to be a brewery back in 1869, Pioneer Brewing Company. Before we parted ways, Brian told me it would be perfect for my camera; I had a feeling he was right.

Blue Blood Brewing is a brewpub; they have a pretty extensive menu including burgers, salads, pasta, and prime rib. I had the fish and chips and it was very good. I had a small flight consisting of the Kompagnon Kölsch, Wicked Snout, Citra Pale Ale-Test 2, Outlaw Series Caribbean FUBAR, and Gin Barrel-Aged Pernicious. The beers were all solid with the Gin Barrel-Aged Pernicious being a definite favorite. As always, you can see my reviews of the individual beers on my Untappd page.

After finishing my flight and meal, their manager took me for a tour of the caves. Please look at the photos, but suffice it to say that I have visited well over 150 breweries and none of them can top this for just plain coolness.

The caves are sandstone, and have been cut out by nature (you can see the water lines) and a portion was carved out with a hand pick. Kids used to hang out and party in the caves for generations; you will notice people carved their names into the walls going back at least until the 1950’s. The kids these days bring spray paint, which isn’t nearly as cool. Blue Blood’s has a policy that if you can prove your name is carved in the caves, you get a free beer. They give tours on Wednesdays and weekends, so plan your visit around that, it is worth it.

Blue Blood Brewing is located at 925 Robbers Cave Road in Lincoln, and they are open seven days a week and have a large, dog friendly patio. By the way, in case you were wondering, Blue Blood refers to Brian’s previous career in law enforcement. If you visit and are in LEO, you will receive a pretty significant discount; it was 20 or 25%, don’t hold me to the exact number.

The day was coming to an end, so I decided I would stay in Lincoln and luckily found Zipline Brewing to be around the corner from my motel. I got there about an hour before closing time so I was unable to view the brewhouse, but I was able to enjoy a flight on their dog friendly patio.

Zipline Brewing Company is located at 2100 Magnum Circle in Lincoln; they are open Wednesday through Sunday and have a happy hour from 3:00-6:00 PM.

Monday morning I headed out to Omaha to visit Upstream Brewing Company, primarily because I wanted to visit with one of the two lead brewers, Mike “Danger” Freeman. For long time Smog City Brewing fans, you might recall that Freeman was one of the original brewers there.

Upstream Brewing is Omaha’s first brewpub and has been open since 1996. While the production facility is relatively small, they brew about 2,000 barrels a year, the dining area is huge; in fact they have a second dining area downstairs and a pretty large patio area.

During my visit they were pouring eight of their year-round brews, five seasonals, and one cask ale. I had a flight while there, including the Mic (pronounced Mike, because Mike brewed it) Czech Pilsner, which was definitely the best pilsner I have had east of the Rockies, to date; I could easily detect the Smog City influence. Freeman confided in me that Upstream will soon be the only brewery in Nebraska with a foudre; I tried the cask IPA with jalapeno which was great. When I asked if cask versions were being accepted in Omaha, Freeman said that they would soon be doing two casks daily. It was good to see a friend doing well, especially if they are back home with family.

Upstream Brewing Company is located at 514 S 11th Street in Omaha and is open seven days a week. They sell 32 and 64 ounce growlers and some bottles to go.

My next stop took me west 15 miles to Kros Strain Brewing Company, in La Vista. Kros Strain (pronounced cross strain) is a partnership between two homebrewers and for a while, Nebraska Brewing Company brewers, Bobby Kros and Scott Strain. I met them my first day in Denver, while at Jagged Mountain Brewing. Bobby and Scott’s wives came to pet Buddy and eventually it came out that they had a four month old brewery in Nebraska; since I was going that way anyhow I said I would try to stop by. They gave me a couple bottles, Fairy Nectar IPA and Helles Creek lager before we parted. A couple nights later I was in a motel room and open the Fairy Nectar; I knew I was going to stop by. As it turned out, they are closed on Mondays but since they are less than six months into brewing and are having trouble keeping up with demand, they were there in the brewhouse even if the taproom was closed.

I entered through the taproom entrance and was immediately impressed with its size and decor; it looked like a fun place for the residents in the housing tract across the street to come over and enjoy a few beers. What I was not prepared for was their massive production facility and customized brewhouse with a 15bbl, 3-vessel system.

Like I said, they were closed so I didn’t want to be too much a bother, but I did try a couple including the Vienna lager and their Fairy Nectar Project – London Ale, which is Fairy Nectar with London Ale yeast and dry-hopped as I recall; they are trying to decide whether or not to bottle it in bombers, I vote yes.

Kros Strain Brewing is located at 10411 Portal Road in La Vista. They are open Tuesday through Saturday and have crowlers, six-packs and kegs to go. Another advantage is that there is another brewery a couple doors down from them in the same commercial complex, Pint Nine Brewing Company. I was told they were a brewery I had to visit, but they were closed on Monday; maybe next time.

There were quite a few other craft breweries and a distillery or two in the area, so I definitely could have spent more time in the Omaha area; but I had some real life business to take care of, a few states away, so I had to say farewell. Nebraska craft beer is doing well. Cheers!

Back to Photos from Blue Blood, Zipline, Upstream and Kros Strain Breweries
[Show as slideshow] 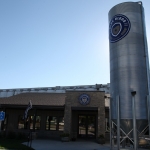 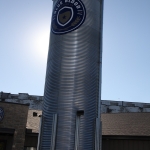 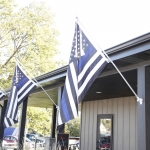 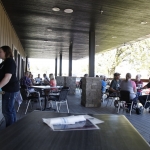 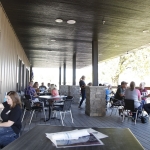 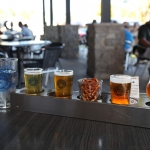 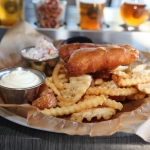 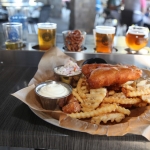 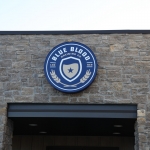 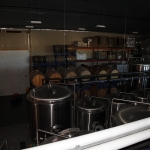 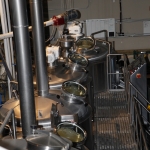 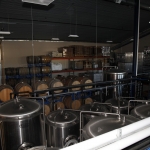 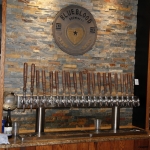 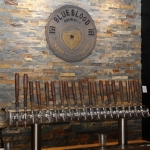 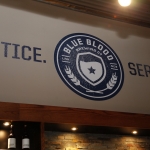 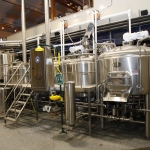 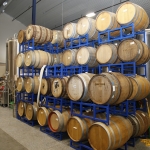 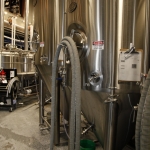 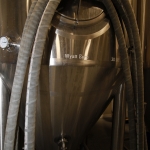 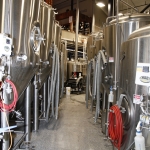 1 2 ... 7 ►
Back to Photos from Blue Blood, Zipline, Upstream and Kros Strain Breweries